A young woman becomes stuck in an underground bunker with two strangers who claim the outside world is under attack in what JJ Abrams called a ‘spiritual successor’ to 2008’s Cloverfield.

The film is essentially a three-hander between Michelle (Mary Elizabeth Winstead), Howard (John Goodman), and Emmett (John Gallagher Jr.) Goodman is on top form as Howard, the man who rescues Michelle from a car accident and takes her to his bunker. There is an unpredictability about the character which Goodman displays effectively, at one point even dancing to The Exciters. Long stretches of antagonism are interspersed with moments that make you feel sympathy for the character and make us question, like Michelle, whether he has ulterior motives or whether he is just genuinely trying to help. One memorable scene, however, in which Howard cannot see Michelle as anything other than a ‘girl’ or a ‘little princess’ is disturbing and foreshadows events to come.

Winstead and Gallagher Jr. also do a good job of creating a sense of vulnerability and not just because of their physical injuries. Gallagher Jr. brings a warmth and wit to Emmett while Winstead in particular brings to life a fierce, resilient female character. Quiet discussions about regrets they have lends a human element and vulnerability to the characters, which serves to make you care about their fates. Every time they try to have a private discussion, the tension spikes as you remember the claustrophobic bunker set and that Howard could be just around the corner. 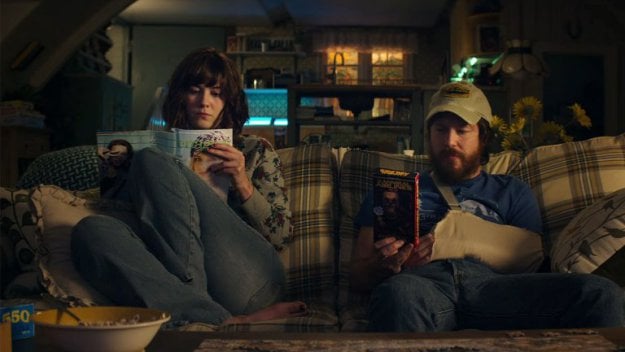 Dan Trachtenberg (Portal: No Escape, Kickin’) certainly makes an impact with his first full-length feature film. The opening sequence with the titles punctuating Michelle’s car accident makes for jarring and uncomfortable viewing, a theme which carries on throughout the whole film. Where Cloverfield used found footage shots, Trachtenberg’s use of close-ups that linger on the faces really brings across the nuances of the actors’ performances. The film’s score is also worth noting as Bear McCreary uses strings to create a constant palpable tension which makes small moments seem like major events in this contained film, such as Michelle trying to reach her phone to try and escape.

Originally called The Cellar, it’s interesting to note that 10 Cloverfield Lane did not start out as a sequel to Cloverfield. It’s towards the end of the film where the Hitchcockian elements meet War of the Worlds and the link to Cloverfield becomes much more explicit, perhaps needlessly so. Aside from being a way to automatically make more money, knowing that the film is a part of the Cloverfield world works to its benefit as it makes you question Howard’s motives further; has there been a nuclear/chemical attack, is it aliens, or is there actually nothing at all wrong with the outside world?

This psychological post-apocalyptic thriller contains some genuine shocks and manages to keep audiences guessing while posing questions about who the real monsters can turn out to be.

Now playing at cinemas nationwide. See www.imdb.com for a screening near you.