Growing up in an overspill estate of Birkenhead, with Liverpool being a short bus ride away, the city always seemed to be the nearest place where things happened. Where those posters and flyers led to. Where independent shops and venues existed which gave further glimpses of a world of art and culture. One that seemed fascinating but also closed off. Later, when I did enter that world, I found that while it did open up so much for me, some of the cultural scene was indeed elitist and exclusionary. Remote from how many people in Merseyside lived their lives. Trying to navigate a way into the creative industries when you had no family connections or real understanding of how it all worked was not easy, and there seemed to be nothing to help you to figure it out. It was experiences such as these that later led me to spending much of my career doing community cultural projects.

Birkenhead itself did have its own cultural gems, including the brilliant, long-established Skeleton Record Exchange, where I would visit regularly to part-ex CDs so I could buy new ones. Trying to get the best deal so I could hear enough new music in a time when there were few other options. Skelos and its big, brightly painted red arrow are, I am pleased to say, still going. Meanwhile the music chain stores in the ambitiously-named Pyramids shopping centre, which represented the future in Birkenhead in the 1990s, have long shut down.

Birko was the classic boom town of the 1800s, which grew rich quickly off the back of the shipyard set up by the Laird family. This wealth paid for the fine Hamilton Square, the largest concentration of Grade I listed buildings outside London, and Birkenhead Park, the world’s first municipal public park, with Europe’s first street tramway running between them. Since then, the town’s fortunes have been inextricably linked with the rising and falling tides at the shipyard which still looms over Birkenhead physically, psychologically and economically. The dramatic vista of Hamilton Square, with its station tower promising FREQUENT ELECTRIC TRAINS, retains its visual impact though. However, for the moment, many of the buildings around the square are empty, including most of the Town Hall itself.

For a long time, the centre of Birkenhead was dominated by its post-war shopping centres, while this older part of town slowly died off. However, as retail struggles, new attention is being paid around here. The founders of the key Liverpool region music magazine, Bido Lito!, have set up a Community Interest Company (CIC) and turned an empty building into a new 350 capacity music venue. Called Future Yard, it’s planned to be the UK’s first carbon neutral grassroots venue. As a precursor, they painted THE FUTURE IS BIRKENHEAD in bright pink letters on the front while work went on inside. The venue builds on the Future Yard music festival held in 2019, which took place over several locations including the historic remains of Birkenhead Priory. Hidden behind an industrial estate, the Priory, which includes the oldest standing buildings in Merseyside, represents the history of ‘the headland of birch trees’ before the industrial revolution. Its tower gives dramatic views across the Mersey and the waterfront, with you standing high above the massive vessels in the shipyard propped up precariously for repair.

Future Yard’s venue opening was hit by Covid, but they have delivered online shows and have an array of gigs lined up as restrictions lift. As a CIC, Future Yard has a social mission which asks questions like: ‘How do we leverage the social and economic power of music in struggling towns?’ and ‘How do we provide new career pathways into the live music industry?’

Nearby meanwhile, in what was once the Borough Council’s Treasury building, a new venture called Make Hamilton Square has opened up, set up by another CIC which already runs successful studios in Liverpool. Housing creative workspaces, it also includes a new small urban farm and an events space. Make similarly has a social mission which includes: ‘to remove barriers to people joining the economy, by making things themselves and becoming self-sufficient’.

As central Liverpool has redeveloped, areas which I knew as largely derelict have become the Ropewalks and Baltic Triangle and cultural centres in a way I couldn’t have imagined. As sure as the wind blows though, cultural spaces in them have been threatened by redevelopment. As such development in Liverpool grows, could Birkenhead become a new local mecca for culture and music? Or is this just the cultural scene being pushed further out – a ‘temporary utopia’ to facilitate more traditional forms of redevelopment? 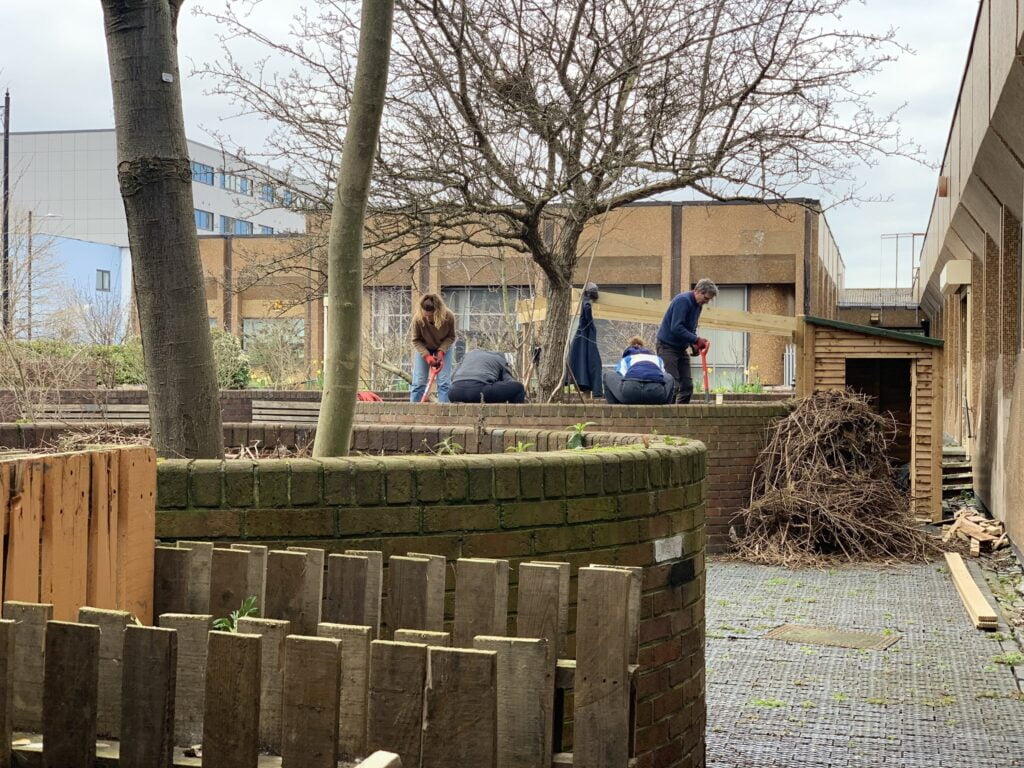 Hopefully, with Future Yard and Make being CICs planned with sustainability in mind, this could make the difference. Future Yard recently received financial support to buy their own building. A long way from trashy but cool venues existing until their landlords get offered a better deal. If these initiatives and others like them are to succeed, they need to be able to control their spaces and receive proper protection and support long term from institutions, authorities and funders.

Still, too many young people in Birkenhead and many places like it are not given enough opportunities to experience creative arts, develop their interests or get their own work out there. Despite everything that’s happening at the moment, places like Make and Future Yard are progressing and offering people new spaces to grow in. Projects such these could create a situation where those FREQUENT ELECTRIC TRAINS are bringing more people to the town than they’re taking out. They point to a different kind of future for Birkenhead. A different kind of future in general.

Tagged with: Birkenhead, city, cultural, Culture, events, Future Yard, Liverpol, Make, Merseyside, oppotunity, scene, town, venue, Wirral
As a CIC, Future Yard has a social mission which asks questions like: ‘How do we leverage the social and economic power of music in struggling towns?’ and ‘How do we provide new career pathways into the live music industry?’
Make similarly has a social mission which includes: ‘to remove barriers to people joining the economy, by making things themselves and becoming self-sufficient’.