‘FYI’ is The State of the Arts’ irregular column. In it, we ask artists, writers, authors, curators and other amazing people to tell us a little more about themselves and their work. Short and sweet, it’s the perfect introduction to (your new favourite) local creatives.

What you’ll be discussing…
Art-making

I am inspired by/ it is inspired by…
I think what I’m mostly inspired by is content that comes from a very human place, like proper gut-level feelings expressed successfully enough to be gut-wrenching when communicated to someone else. And so when it’s consumed you feel less alone.

I don’t know if that makes much sense, and realise it may sound vague or obvious given that I’m a human and you’re a human and we are so intrinsically defined by our humanity that it needn’t be mentioned or even considered in day-to-day conversations. One of my biggest writing inspirations is David Foster Wallace.  whose piece ‘This is Water’ explores the concept of two fish swimming along and one turns to the other and asks ‘how’s the water?’ to which the second fish replies ‘what is water?’ – I guess I’m touching on that same idea here.

But anyways, I feel like our human values, our ethics, and our beliefs – the parts of ourselves that go much deeper than the personal aesthetics we present on the surface – are becoming too complex and difficult to express in a world increasingly geared towards automation and cultures of scrolling, sharing, and easily digesting a constant stream of short-form content that exists to be liked. So when I find someone who manages to express the obvious in a way that makes it seem not necessarily beautiful or nice, but I guess completely sincere and filled with a truth that is now scarce, I really become quite obsessed and buy all of their books/ find every painting or drawing they’ve ever done/ scour out every interview they’re a part of on YouTube. The main people are probably David Foster Wallace, Miranda July, Kate Tempest, Louise Bourgeois, Maria Lassnig, Jesse Darling, Noah Baumbach, Damien Rice, and The National, and most recently I’ve been reading and enjoying Kurt Vonnegut’s novels.

How it began…
I started to really enjoy art and to take it seriously during school, particularly at GCSE level and my passion then grew exponentially through A-levels, foundation, and finally my bachelors degree in Fine Art. The period following my graduation has been shaky to say the least. I’ve continued to make things, images mostly, but that’s not to say that I’ve particularly enjoyed it. I’ve found it incredibly difficult to work without the structure, validation, and gratification that up until now had been provided by education and the world of academia.

That’s where my passion started and now that it’s gone I find myself wondering what the fuck the point is. I’m reminded of the communities I grew up in, the town filled with people of which only a tiny minority have stepped foot in a contemporary gallery, let alone cared about what you might find in one. You go from being surrounded by a world, or a bubble within a world, that tells you there is intense and important meaning to be found in certain objects and that they ought to be celebrated. Then you leave the bubble and realise meaning is arbitrary and the majority of the world is not only indifferent to what you feel passionately about, but in many cases it is actually hateful and spiteful of it. Of this bubble in which unmade beds and scribbles that their kids could have done is valued above the average salary of someone working a job they hate in order to survive. I guess what I’m trying to say is that I feel slightly conned, and that I need to start again, to learn to walk again without the crutches of education so that I can properly figure out how to hone in on these urges to create and how to do so in a way that is sustainable. Not in terms of money but in terms of sustaining some sort of mental spirit that is capable of a sort of inner catharsis. I’m going totally off track here. 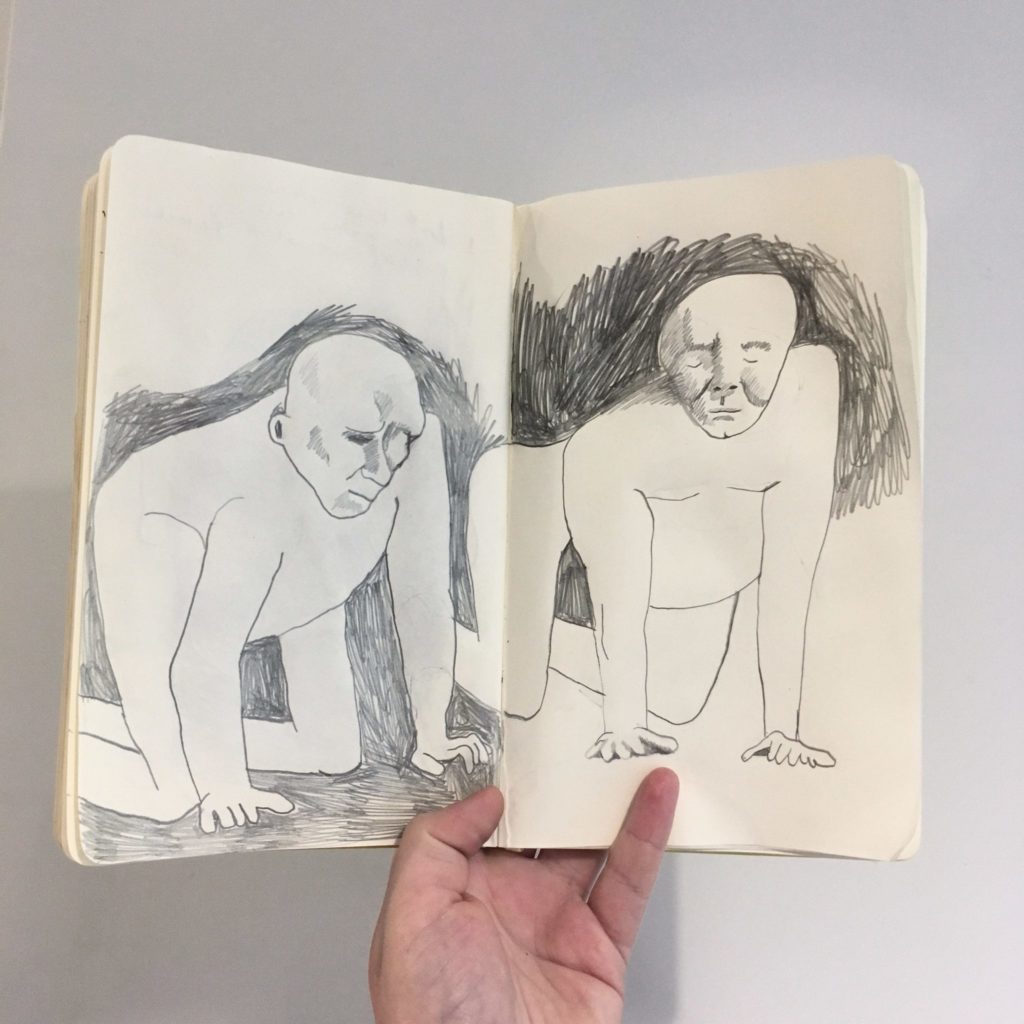 My favourite thing about it is…
I really love the feeling of flow. I spend so much time worrying about my use of time and think most people will have experienced days in which the passing of seconds and minutes and hours becomes sort of painful to endure. So yeah, I think flow is the opposite of this feeling and achieving it can feel like the weight of the world, or at least the weight of our temporal experience of the world, has been lifted. Most people now will probably have little experience of the flow state and be more familiar with hyper focus, like when you’re binge watching Netflix and find ten hours has passed without you losing focus, but you tend to exit those sorts of states feeling like you’re a completely moronic and useless waste of space, rather than feeling gratified and generally uplifted, as you do when you’ve been lost in the act of flow. I tend to achieve this when I’m painting or drawing or reading.

The main challenge of it is…
Being able to focus can be hard. I’m writing this straight after waking up because I find it’s easier to achieve things before the rest of the world has woken up. It’s also easier when you haven’t been staring at your phone for hours. That’s another huge challenge of any sort of attempt at creativity – having total access to a world of other creatives doing what you’re trying to do but doing it better and more often. It really is debilitating at times and you can feel what was once an intrinsic need to create becoming a futile pursuit of extrinsic values like popularity and financial success. I often think about deleting Instagram in the hopes of squashing these external pressures but it’s stupidly difficult to let go of. Oh, and of course there’s always the struggle of existing in a world that seems to get more frightening by the day. Whether it’s the political climate, climate change, or the awfulness that is hyper capitalism, there is always something much larger than yourself that makes the act of creation seem futile and pointless. Insulting, even. I don’t know.

Next up I’m thinking about…
I really want to try to write something. I’m not sure what. Maybe a short story or an essay. I’ve been saying this for a while though and I still haven’t written more than a single sentence at a time. I become a perfectionist and get incredibly scared of writing something that might not be brilliant and the odds are, given that I never practice, whatever I write will not be brilliant. So at the minute I’m focusing on reading a lot in the hopes that I can learn something from the books that have an effect on me. The problem is that I only read books by people whose talent is incredible, out of this world, seemingly impossible to ever touch upon. So now I’ve got to try and overcome this feeling that the best has been done, and any attempt at writing something as good as, or better than that, will be a painful and pointless exercise.

Tagged with: aesthetics, and The National, artist, contemporary art, Damien Rice, David Foster Wallace, Ellie Hoskins, futility, fyi, inspiration, Jesse Darling, Kate Tempest, Louise Bourgeois, Maria Lassnig, Miranda July, news, Noah Baumbach, painter, passion, reading, what is water, writing
I find myself wondering what the fuck the point is. I’m reminded of the communities I grew up in, the town filled with people of which only a tiny minority have stepped foot in a contemporary gallery, let alone cared about what you might find in one.
I guess what I’m trying to say is that I feel slightly conned, and that I need to start again, to learn to walk again without the crutches of education so that I can properly figure out how to hone in on these urges to create and how to do so in a way that is sustainable.
That’s another huge challenge of any sort of attempt at creativity - having total access to a world of other creatives doing what you’re trying to do but doing it better and more often.