TSOTA x TRS Studio Visits is a collaboration between The State of the Arts and The Royal Standard. TRS is a an artist-led gallery, studio and social workspace in Liverpool, working with over 40 artists. Every month we will be presenting interviews and studio visits with artists working in the space and chatting to them about their process, tools and the meaning of art-making. This month, we talked to Frances Disley. 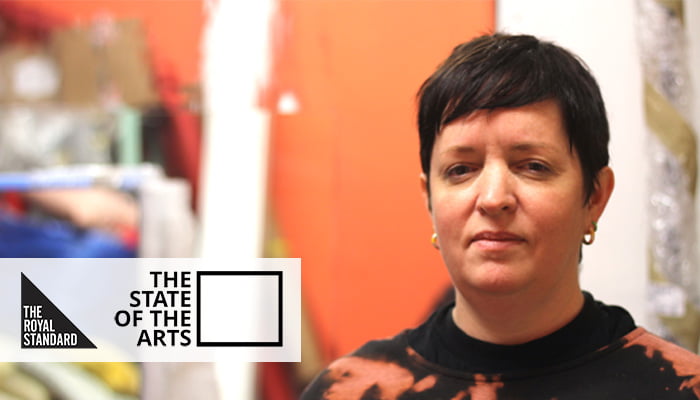 Can you tell me a bit about your work in general? (I know this is a big question but just a few lines about the themes and mediums as a quick intro to your work would be perfect)

So I’m kind of a multidisciplinary artist in that I use all sorts. I just had an exhibition at the Bluecoat which involved plants, videos, textiles and furniture and the whole thing was designed to help lower the viewers anxiety, which I think can be a problem in gallery spaces for some people. But I need to say as well, that the exhibition was also inspired by my obsession with Star Trek. In particular the Holodeck: a place that re-occurs through the different versions and is a place for staff to live out their holographic dreams which alludes to what I get to do as an artist, albeit less holographic and a bit more gaffa tape and emulsion. 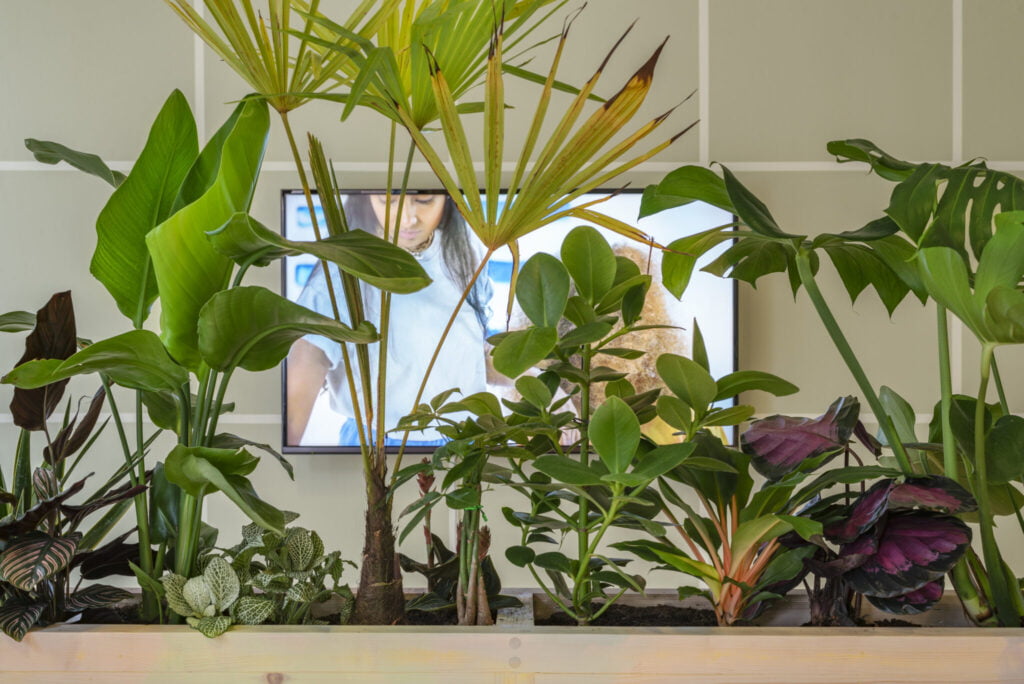 I’m saying this as I never want to be over earnest in what I do and I think sometimes the best way to lower people’s anxiety is just to distract them for a while. I also work with dance and recently completed a work in collaboration with Fallen Angels Dance Theatre commissioned by The Turnpike Gallery in Leigh where I created a large painted dancefloor, objects and outfits and co-choreographed a dance with Paul Bayes- Kitcher where the floor marking acted as a score for the dancers. I was developed through a series of sessions where I added objects and markings as catalysts for movement and we developed it from there. I’m just in the process of editing the video of the work at the moment. It’s hard to describe my work without talking specifics.

I’m also working on a project with the Human Libraries based at Bootle Library where I’ve made a series of audio works which act as guided imaginary journeys which are being sent out to a chronic pain group with a pack which includes a herbal tea, scent and publication all made to amplify the imaginary journey. It’s called ‘freshly cut grass’ – anyone can listen to them and I’m hoping they may be useful for people suffering with anxiety at the moment.

When I see your work I always get the impression that you would like to paint everything, that you’d colour the world if you could get a brush big enough (maybe it’s because of the bus!). Where does your love for colour come from?

Ooh, I don’t know you know. It’s everywhere I guess, sorry, that sounds really stupid. Sometimes when I look back at a work I kind of forget all the paint as if it’s just a base layer for everything. It’s sometimes my way of imposing myself on collaborations and it’s where I really feel I can play. I love making work with a function and then the colour part I can have fun with. 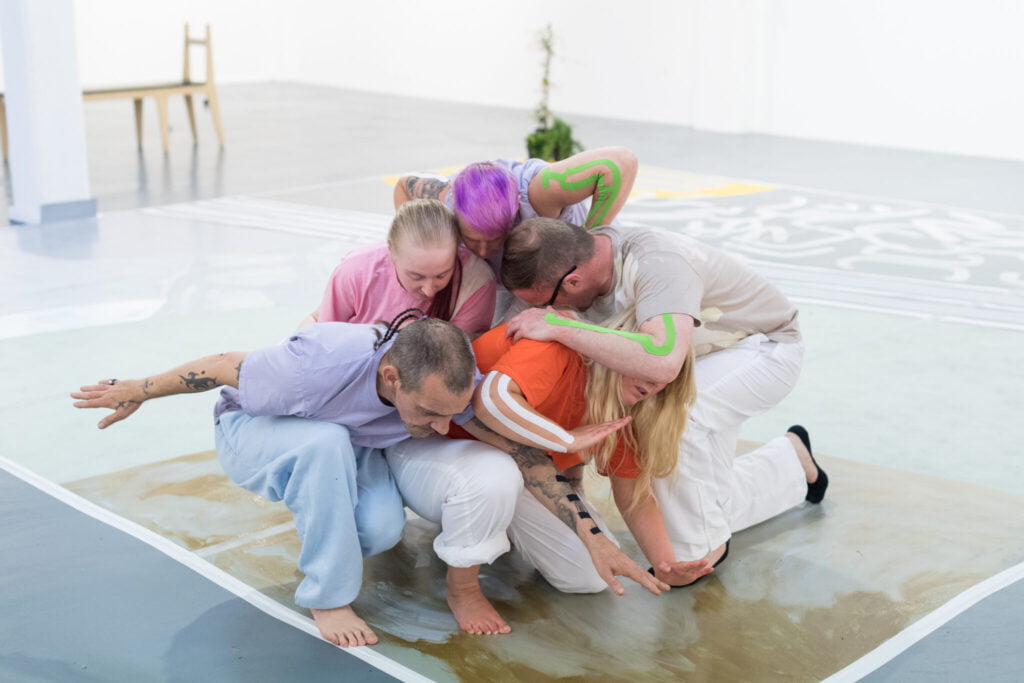 How do you choose your colour palettes for a piece or a body of work?

In recent work I’ve looked at how immersing yourself in certain colours can reduce anxiety levels. I also have started a few works by picking Nike outfits that I can never afford and could never pull of and using their colour palettes as a base. I like the idea that a starting point can be something like an outfit that a trend team have distilled down from loads of research and it gets expanded back out again. Lots of colour decisions are intuitive (but really that’s born out of all kinds of fleeting desires).

Your more recent work features the theme of self-care – why do you think that art is a good way to communicate the idea of rest and relaxation?

I’d say I’m interested in wellbeing and the wellness industry too and generally the things we think will make us feel better. So in part, some of it is slightly or playing or poking at this, alongside a genuine desire to make a work that makes someone feel better.

I had a moment a few years back in a Zumba class in Wavertree where we were all in this massive municipal sports hall doing this military style march in a circle and I felt high as a kite and thought “shit I wish I could make something or a space that made me feel this good” and more importantly that I wanted to do more than once. That’s when I made the dance workout video and classes with Maria Malone from Movema for The Human Libraries again and I worked with Foodsketz who made tonics and seasonal energy food and we put on a free crèche for parents and carers of young kids. I think as most galleries are free public spaces, if they could become places that make people feel better then it’s a triumph. 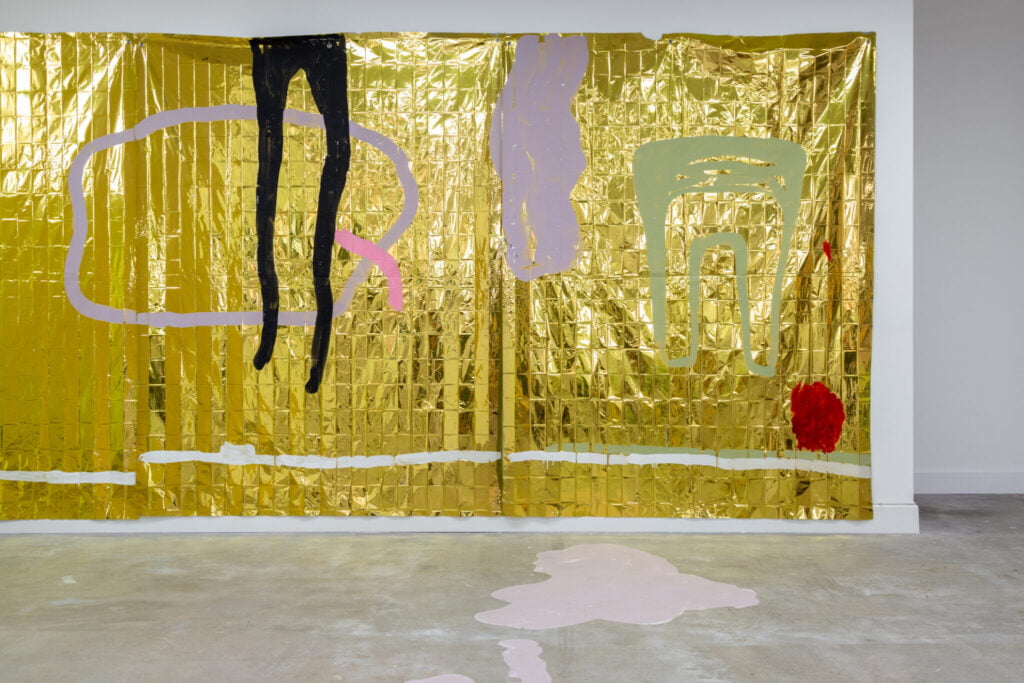 Also in response to your question and going back to one of my answers if we lump visiting a gallery in with leisure activities then rest and relaxation are key. I also think if you can distract the audience or put them at ease they are more likely to trust you and begin to see these spaces as their own which I think would be great. Self care is important especially if no one is going to give it to you but I’m totally interested in group care and ways to make that happen with, and between, strangers. I’m really interested in plants and greenery and how researchers have found that spending time with plants, or even looking at images of plants can give us “cognitive restorative time”. I think at the moment with things shifting at a crazy pace, with everyone feeling out of control growing, nurturing, observing and being with plants feels really useful.

Do you have any rituals in the studio?

I like to start with a tidy up in the studio (which is a joke if you look at the pics, I think I’m a bit of a hoarder). I faff loads and make sure I have a cup of tea and snacks laid out. I’m a bad procrastinator which is ridiculous as I’ve got 2 small kids so studio time is really precious. I’ve been making music for work lately which is fun. I don’t always listen to music though when I’m working as I become obsessed with flitting about. I’m quite affected by mood in music (as I’m sure everyone is), I listen to anything from Leikeli47 to Bad Brains shouty stuff, it gets me going.

Artworks in progress really haunt me. I can have a bad feeling that lingers through the night about a work usually when it’s just begun. Usually leaving it alone and coming back is dead useful. I’m really quite impulsive and will batter something until I feel okay with it. To be honest there’s not much tentative contemplation in my work. 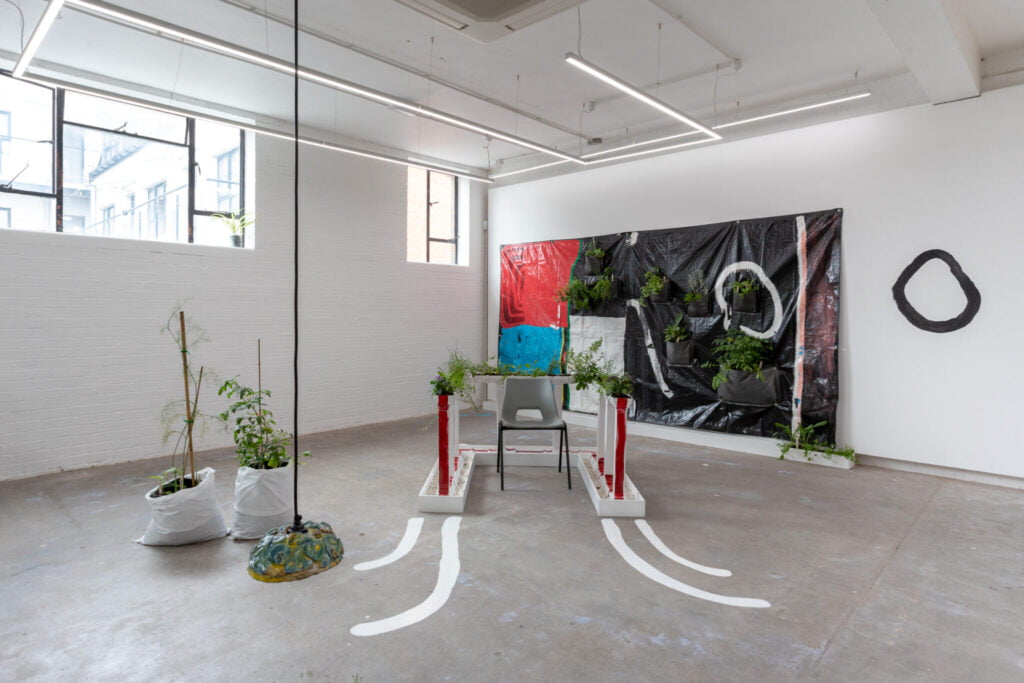 We ask everyone this one – what is the one tool in your studio you couldn’t live without?

Oooh, that’s hard! I had a Makita drill that I loved but it got robbed. I really love tape but that’s a material not a tool, eh? Maybe a paintbrush then, a wide household paintbrush.

Tagged with: artist, Bluecoat, bootle, colour, contemporary art, exhibition, Frances Disley, guided imaginary, interview, journey, multidisciplinary, painting, project, relaxation, rest, self care, Sound, Star Trek
I think sometimes the best way to lower people’s anxiety is just to distract them for a while.
I think as most galleries are free public spaces, if they could become places that make people feel better then it’s a triumph.
The exhibition was also inspired by my obsession with Star Trek, i particular the Holodeck: a place for staff to live out their holographic dreams which alludes to what I get to do as an artist, albeit less holographic and a bit more gaffa tape and emulsion.