In Japan, they eat KFC for Christmas. While you’re tucked neatly into bed, stocking suspended above the fireplace, dreaming of candy-canes and Christmas elves, snowdrops flit across the neon lights of Shinjuku and ravenous salarymen queue around the block for a soggy bucket of pressure-fried chicken. As part of a 1974 advertising campaign The Colonel implored the Japanese public to have ‘Kentucky for Christmas’ – and now it is an actual tradition.

Sometimes you have to marvel at the transformative effects of global capitalism. Other times you scratch your head and ask: “what have we done?”

Eight thousand miles west in Liverpool and it’s too busy pissing it down to snow. Globalisation is yet to bring the Christmas Bargain Bucket to the North West, but it has brought a lot of other decent stuff. Including, this winter, a truly excellent set of paintings by Taki Katei (1830-1901), as part of the UK-Japan Season of Culture. It’s the first time his work has been shown outside of Japan.

I met my friend Yuko for a glass of wine and then went to check it out.

Have you heard of Taki Katei?

No, I haven’t. But I’m not an artist. I study marketing.

Cool, well maybe we’ll both learn something. Shall we go in?

The environs of St George’s hall and the world museum provide an interesting backdrop for the exhibition. The weather-beaten pillars and cobbled paving stones blend in with the grey sky above, making for a dour scene. It’s a world away from the calming, floral exhibition we’re greeted with inside. Bright peonies, proud cocks and aristocratic cranes adorn hanging scrolls, with traditional script filling in the gaps and fuelling the imagination.

What’s it like seeing such a Japanese exhibition in Liverpool, Yuko?

It’s definitely not something I thought I’d see here when I moved! It’s a bit weird but it’s also really cool.

Do the pictures remind you of home?

Well, a little bit. They’re not the kind of thing you see every day back in Japan – they’re a bit more historical if that makes sense. They do look a bit more unique so far away from where they were drawn.

We walk around the room and it’s clear that great care has been taken by the curator. The layout of the room, complete with koi pond and torii gates, combines with the sound of Japanese language, to transport you beyond Eurasia and across the Sea of Japan.

Katei’s work is in a traditional Japanese style and as such largely focuses on nature. Common motifs are the beauty and power of the natural world, the relationship between man and nature, and the desire to escape the clutter of everyday life for some far off misty mountaintop. In the age of the extinction rebellion it’s interesting to see the reverence with which nature was held here.

Lots of the drawings were preparatory or teaching works, so the exhibition puts a large emphasis on the instructive aspects of Katei’s catalogue. You can follow the steps that a Japanese student would have followed over a century ago in order to replicate popular works of the great master; if you are suitably inspired there is tracing paper available for you to sketch some selected pieces. 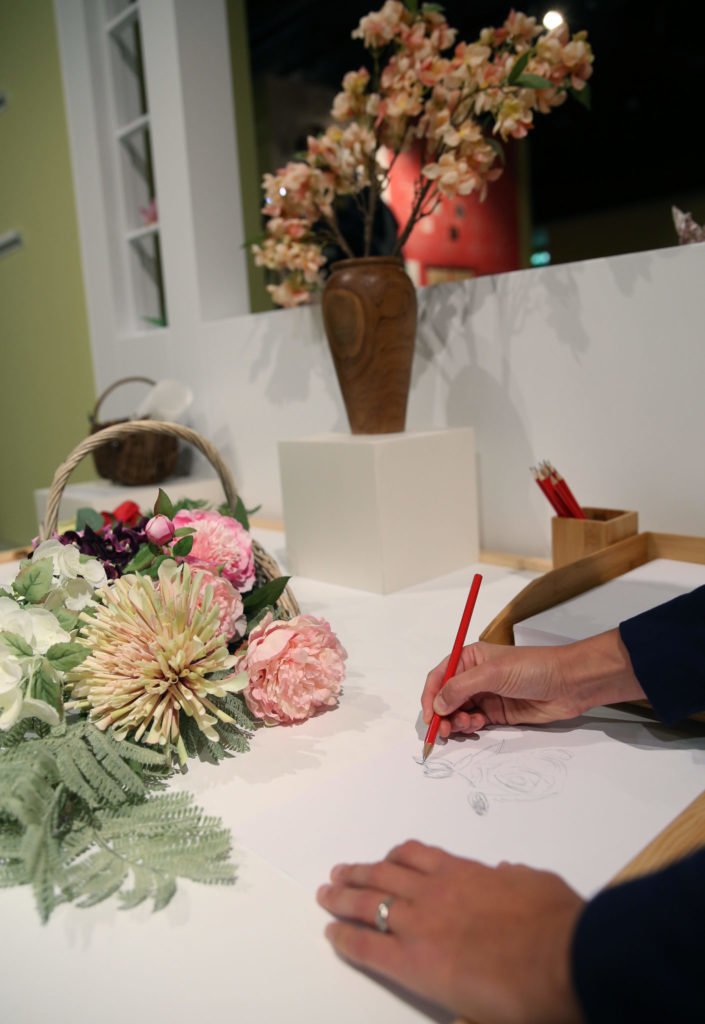 The selection is modest, but satisfying. As we round off the exhibition, we come to some of the more complete pieces and, interestingly, some of the more westernised versions. It seems that as Japan opened up during Katei’s life, artists of his school began to use different techniques in order to appeal to a more global audience. A slightly denser use of paint and a horizontal canvass give a Western twist on a distinctly Japanese style. A fitting way to end, and perhaps a hint at what was to come. As an East-West collaboration, Taki Katei may not have the mass appeal of battered poultry at Christmas, and businessmen may not be queuing in the snow for a taste, but his work is definitely worth checking out if you fancy something a little bit different this winter.

So, Yuko, what was your favourite part of the exhibition?

Probably the tracing, it was really nice to have a go at some of the drawings.

Would you recommend it to a friend?

Do you fancy a KFC?

No. Maybe a Nabzys though.

[NB: This last line did not actually happen.]

‘Drawing on Nature, Taki Katei’s Japan’ is on display at the World Museum until the 12th April. To find out more about the exhibition and tickets, go to the website.

Tagged with: art, Culture, exhibition, Japan, japanese, paintings, taki katei
Sometimes you have to marvel at the transformative effects of global capitalism. Other times you scratch your head and ask: “what have we done?”
Common motifs are the beauty and power of the natural world, the relationship between man and nature. In the age of the extinction rebellion it’s interesting to see the reverence with which nature was held here.