Introducing Minds Idle & their DIY EP – ‘Live from an Island’

It was a joy to have a few laughs with psychedelic retro-pop outfit Minds Idle, the latest band to arise from Sheffield’s eclectic scene. We chatted about their new EP ‘Live from an Island’ which tastes similar to that first post-lockdown pint, soothing and familiar but also slightly spine tingling. 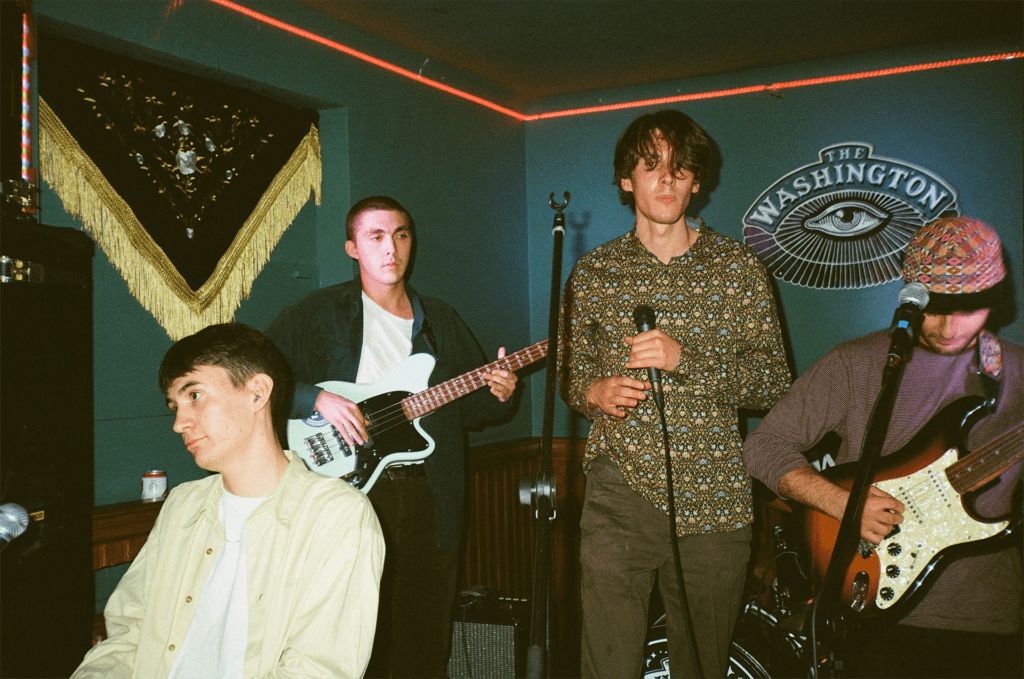 “I guess ‘Minds’ comes from the psychedelic nature of our music, and ‘Idle’ is just because we are a bunch of lazy bastards”, begins Ted Mitchell, lead vocalist. Minds Idle are anything but lazy on stage, well acclaimed for electric, energetic antics at hometown haunts like The Washington and Café Totem. “We don’t take ourselves too seriously and have a lot of fun, we bounce off each other, people love to have a laugh, as well as watch the music”. Their growth has been organic, starting out as long-standing school mates “mucking around and writing weird little songs in James’ room” to realising “some of our songs were actually good”.

Growing up absorbed within Sheffield’s diverse array of shapes and sound waves, from folk to techno, and its thriving gig circuit, it is no surprise they were keen to make their mark.

Ted expounds “it’s weird how Sheffield as a city is not big, like Manchester, but musically, it’s given a disproportionate amount of massive musical acts”, he laughs and continues “We made a pact, right from the beginning, we were not going to sound like the Arctic Monkeys.”

The band contribute an unconventional, swirling psychedelic sound, to the saturated ‘indie’ guitar band landscape. Their nostalgic sound nods have been heavily influenced by the taste of generations before them. “Me, James and Jack all seem to be quite tuned in to old stuff, dad rock I guess, but there are different ends of the spectrum between the three of us, I like more Velvet Underground and Pink Floyd. Then Jack likes heavier sounds and a lot of funk, James’ fantasy is to be sat on a rocking chair in Mississippi smoking a pipe and strumming away at an old beaten up guitar”.

Their debut EP, ‘Live from an Island’, was released in the midst of UK lockdown, a very strange time for new artists. Bassist, James Leaney tells me “It’s a real shame not being able to gig it, the upshot was that we were giving people something to listen to whilst locked in.” Like many musicians facing a similar pause to the live music scene, they have been incredibly adaptable. On the day of release, Ted took to Instagram Live to play tunes, new and old. The session boasted Ted’s charming and comedic personality, raw vocals and an ironing board in the background, characteristic of the DIY nature of the EP.

Ted explains that this lockdown period has been a musical blessing, giving him a break from his hectic day job. “Just before lockdown we recorded a few tracks ourselves, so we had the raw recordings. Then lockdown happened, I was like great I’ve got all these recordings, I can just sit here and mix them all myself. I didn’t know how to produce records, I still don’t [laughs]. I just watched YouTube videos and tutorials. It is very much a DIY EP”. James adds, “It lends to our sound because we are a touch nostalgic, we want our EP to sound like someone dug it up.” 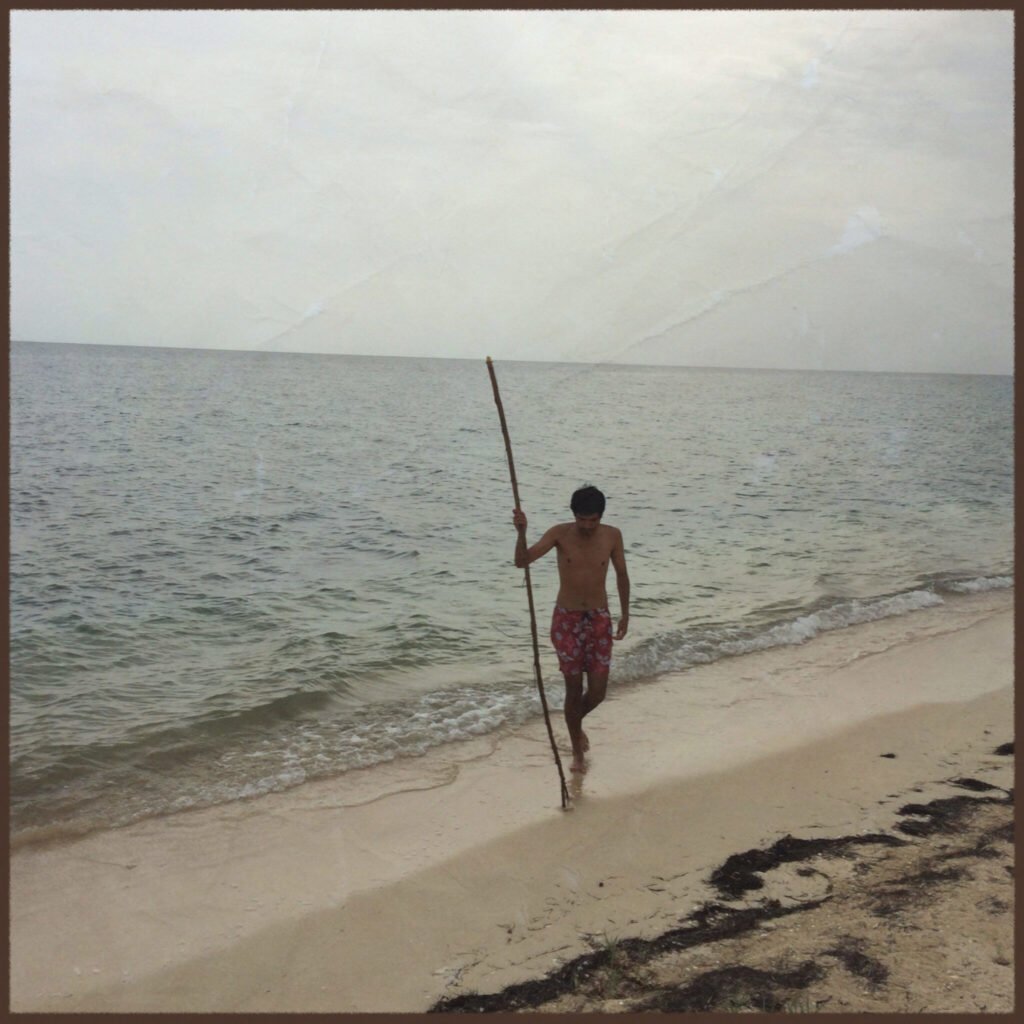 Live From an Island EP

‘Live from an Island’ sleekly fuses the vintage sounds of 60s/70s garage and glam rock with spacey psychedelic melodies and paranoid scattered lyrics, producing something that synchronously oozes warm familiarity and uniqueness. Each track has a distinctive, consistently beautiful intro which enables a transcendental immersion into each song. Ted concedes “I guess I get a lot of my music taste from my dad and he’s got a real thing about intros, he’s got endless playlists of the best intros, so I’ve always thought of intros as the really important bit of a song”.

The EP commences with ‘Teenage Residue’, a tranquillising, smooth jazzy introduction. Followed by the darkly humorous ‘Love in the time of Apocalypse’, which draws some unsettling parallels to our current corona-tinted days, despite being written over a year ago. ‘Son of an Alchemist’ is lyrically frenzied, full of retro pop-rock flavours and radiates soaring melodies. “We made a riff and built a song around it. Lyrically, I was just blabbering random stuff and the phrase “son of an alchemist” came out, I’d gone through a hundred other phrases before getting to that. The phrase came first then I just wrote the rest of the lyrics around it.”

The final track, ‘6060’ is another subdued but melodic number. Ted reveals some of his thoughts behind this track “It’s not very clear but I did have a narrative in my head, it’s a dystopian future type concept, I had the image in my head of a guy sat in a bunker with the window boarded up wondering what the fuck is going on, ’cause it’s all apocalyptic. It’s a very paranoid sort of song, but also hopeful, then it gets darker at the end which could maybe be the end of the world.”

Speaking of the end of the world, James and Ted reveal their future plans. “We have done the whole self-release thing, so we are going to move away from that and go in with a dude we trust and push out a single pretty soon. I don’t think we can move forward being totally insular and isolated on our own, so we need to branch out and let people help us, which we have always been a bit scared to do”.

Ted and James also divulge that they are planning a music video for some visual stimulus.

Imagine the below, but even weirder. I think we are in for a treat.

Live from an Island, the new EP from Minds Idle is available on Spotify, Apple Music and iTunes.
Instagram: minds_idle
Twitter: mindsidleband

Tagged with: creative, diy, ep, interview, island, live from an island, lockdown, lyrics, minds idle, music, Psychedelic, release, Sheffield, Sound
“We made a pact, right from the beginning, we were not going to sound like the Arctic Monkeys.”
"It is very much a DIY EP”. James adds, “It lends to our sound because we are a touch nostalgic, we want our EP to sound like someone dug it up.”
Ted explains that this lockdown period has been a musical blessing, giving him a break from his hectic day job.