‘All the People Were Mean and Bad’ by Lucy Caldwell

‘The Body Audit’ by Rory Gleeson

Celebrating 16 years of the Award, the shortlisted writers have been influenced by a year of lockdown with a focus on kindness, memory, loss and longing. The judges praised the shortlist for its humanity, compassion and hope with the stories inspired by teenage empathy, time passing, and journeys triggered by ‘inbetween places like planes and trains, folklore, loneliness, and the ‘Great Stalin Plan for the Transformation of Nature’.

The BBC National Short Story Award is one of the most prestigious for a single short story, with the winning author receiving £15,000, and four further shortlisted authors £600 each.

Comma Press publish the shortlist as an anthology each year, so if you want to read the shortlisted stories ahead of the winner’s announcement, you can order it here.

I’m pretty sure I wrote the first draft when I was hot and sweaty and generally admiring the body confidence of sundried old Italian men in Speedos. But that’s a narrative and not necessarily true. I know I was missing being around people, and I was thinking about the Gaeltacht, and I was thinking how much I’d like to go to a rave. It was lockdown. There was a lot of stuff getting bandied about.

Spite your writerly enemies by finishing brilliant and bold work. Crush them with your empathetic genius, with brave and honest art.

Shout out to “The Mom of Bold Action” by George Saunders. Just the best fella having fun with voice and imagination and folks injuring other folks.

The story itself doesn’t really have a neat origin – it’s me attempting to pull together a lot of ideas about concealment, identity, society, love and landscape – but the setting, the Soviet steppe in the late 1940s, certainly does. I was researching a non-fiction book on birds when I came across a paper in the journal Environmental History about the Great Stalin Plan for the Transformation of Nature. For some reason it felt like a great backdrop for a story. Why? Why not?

Keep going. Read a lot (read widely, but read what you want). Take your work seriously and yourself not seriously at all. Write with care. Keep going.

Owen Booth’s ‘Frankenstein’s Monster is Drunk, and the Sheep Have All Jumped the Fences’ was the best I’d read in a really long time.

I wrote Toadstone during the Winter lockdown of the pandemic. I had just read Edward Parnell’s wonderful memoir Ghostland and that led me to Graham Swift’s Waterland. I would say these were both important literary influences when it came to the ideas and themes presented in the story which mostly concern memory, family history, return, the links between the present and the past, the (inevitable) passing of time, ageing and illness, passivity and how the male protagonist is largely powerless to combat such things.

I’ve never been ‘toading’, at least not yet. I researched toads. I discovered toadstones from a book on English folklore and the story developed from there. There’s endless material for writers of fiction in the lore of our land. My short fiction tends to contain more darkly fantastical elements and some of those are (almost) present here.

Go out and have experiences. Read. Write. In that order. Reading stimulates writing. Then get your best writing out there. Submit it. Don’t fear rejection. Learn from it. Learn the markets too, the magazines and publications who might consider your work. Network. Go to events. Make writing a central element of your life. Dedicate time to your craft. Keep notebooks. Hardback notebooks are best because they last. Do something writing related every day (even if that thing isn’t actually writing). But don’t rush. There’s no rush.

And don’t give up. Persevere. It’s a journey every writer is making. It only ends when everything ends. And perhaps not even then.

I think I’ll opt for Naomi Kritzer’s Cat Pictures Please as it’s the sort of story I try to teach my students to endeavour to write. It’s contemporary, clever, has something to say about our culture and our times and engages with the sorts of issues many students seem keen to address whilst remaining compelling and not forgetting it’s a story. It deservedly won a Hugo. 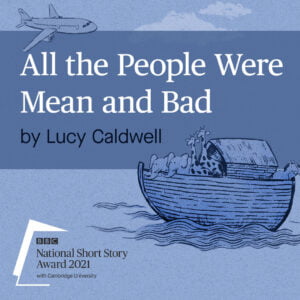 A Bible story in the stay-and-play I used to take my toddler daughter to. One of a series of illustrated Bible stories for very young children, it formed the basis of the fictional retelling of Noah’s Ark in my story, which gives the story its title: “All the People Were Mean and Bad”. The story’s themes and tensions – of how to make sense of life without a religious framework, of how to be good, and in what to have faith, in a world that can seem bad and faithless, or at least indifferent, radiated from there.

Nothing apart from reading all the time, and anything. And obsessing over how it works, and why. I love the Irish writer Joseph O’Connor’s account of how his first story was a work of absolute genius: because it was written by John McGahern. He talks of how he loved McGahern’s story “Sierra Leone” so much, that he copied it out in an exercise book many times, each time changing a few of the characters’ names and the details of the setting, until it was a story of his parents in their Irish hometown. It was no good by then, he says, but it was his, and he was hooked. I think playing a game of ‘literary karaoke’ with a story you love can be a fun place to start.

One of the most haunting stories I’ve read recently is Ellen Gilchrist’s “There’s a Garden of Eden”, from In the Land of Dreamy Dreams, an 80s Faber paperback I picked up in a charity shop over the summer. The story is deceptively simple, barely ten pages long, yet does what all great stories do, in evoking an entire world, outer and inner, of its main character, Alisha Terrebone, trapped like an old fairytale princess in ossified stories of her own making.

I was also very taken with Mariana Enriquez’s story “Kids Who Come Back”, from The Dangers of Smoking in Bed, set in a version of Buenos Aires where long-lost and disappeared children suddenly return. On which subject, I found myself weeping as I read “A Love Picture: Belfast 1940”, the opening story in Bernard McLaverty’s masterful new collection Blank Pages and Other Stories. It’s a miracle of a story, and I’ll never forget it.

At the end of February 2020, I was in Ukraine researching some idea for a novel, when my ancient uncle died — the last of a generation, and I very much wanted to be at his funeral. I was travelling entirely by train — on a Eurail pass — so made some swift bookings and was there on a hill in the Cotswolds in three and a half days: Kyiv to Lviv, to Krakow, to Berlin and Cologne and Brussels and London, days looking at Europe passing by, two nights in sleepers, each country about to lock down at the start of the pandemic. When I got home I started to write, trapped before my desk but without a plan, needing to write out of the anxiety of the time, and this story came out of it.

Follow your instincts and listen to your own voice, not the voices of others.  That way you have the best chance of being individual, original, and true.

There’s no recent story that comes to mind, but an old story recently read for the first time as it was republished in the New Yorker: Doris Lessing’s ‘A Mild Attack of Locusts’. A classic story, naturalistically told — and for me personally, a great story to read on a farm this year of all years, where we have been waiting for harvest under the clouds of this summer just gone. There is so much that can go wrong and yet so much more that could go wrong.  And maybe, for most of us, ruin is never reached? Lessing approached big themes in her novels, small and personal ones in her stories, and I begin to think that the stories age better.

Born in Belfast in 1981, Lucy Caldwell is the author of four novels, including the forthcoming These Days (Faber, 2022), several stage plays and radio dramas and two collections of short stories: Multitudes and Intimacies. She is also the editor of Being Various: New Irish Short Stories. Awards include the Rooney Prize for Irish Literature, the George Devine Award for Most Promising Playwright, the Dylan Thomas Prize, the Imison Award, and a Major Individual Artist Award from the Arts Council of Northern Ireland. A former fellow of the Royal Literary Fund and the Seamus Heaney Centre at Queen’s, a Visiting Fellow at Goldsmith’s, she was also elected a Fellow of the Royal Society of Literature in 2018. In 2021, The Sunday Times proclaimed her ‘One of Ireland’s most essential writers.’

Rory Gleeson is a novelist, playwright, and screenwriter. He studied Psychology at Trinity College Dublin before earning further degrees from The University of Manchester, Oxford University, and UEA. His writing has featured in The Irish Times, Sunday Miscellany, Far Off Places Magazine and Granta. He was the Burgess Fellow for Fiction at The University of Manchester in 2019 and was awarded a Literature Bursary by Arts Council Ireland in 2020. His debut novel Rockadoon Shore was published by John Murray Press in 2017.

Born in Lincolnshire, Danny Rhodes is the author of several short stories and novels, including Asboville (Maia Press, 2006) which was adapted for BBC Films by Nick Leather, and selected as a Waterstones Booksellers Paperback of the Year. His other works include Soldier Boy (2009) and FAN (2014), a novel grounded in his 131 About the Authors experience as a Nottingham Forest supporter at the Hillsborough disaster in 1989.

Richard Smyth is a writer, critic and author of The Woodcock (Fairlight Books, 2021). His work has appeared in The Guardian, The New Statesman and The Times Literary Supplement, and he is the author of five books of non-fiction. He lives in Bradford, West Yorkshire, with his family.

Tagged with: award, BBC National Short Story Award, Comma Press, Fiction, nfa column, short fiction, short story, shortlist, writing award
Celebrating 16 years of the Award, the shortlisted writers have been influenced by a year of lockdown with a focus on kindness, memory, loss and longing.
"Go out and have experiences. Read. Write. In that order." - Danny Rhodes
"When I got home at the beginning of lockdown, I started to write, trapped before my desk but without a plan, needing to write out of the anxiety of the time, and this story came out of it." - Georgina Harding