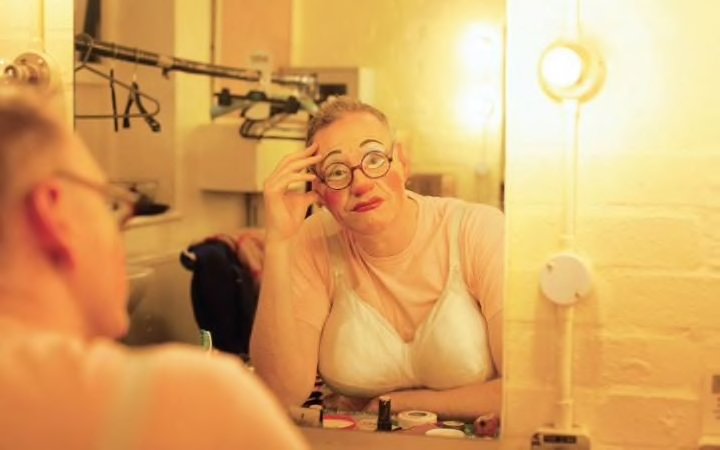 Think of pantomime and you probably think of the groan-inducing jokes, refrains of ‘it’s behind you’, cringing parents having to get up on stage and be forced to clap along as a cow dances, and overpriced ice cream. It’s got a bit of a bad rep, yet remains a key part of the Christmas calendar. But why? What’s value does it have as an art form? Can it even be considered one?

Pantomime isn’t necessarily thought of as being ‘art’ or ‘culture’, yet, as a form that borrows from multiple genres, it is truly creative. According to Professor Jame Moody, Director of Humanities Research Centre at the University of York, its “unique fusion of eccentricity, ambiguity and absurdity has much to tell us about our national identity”.

It certainly offers a unique blend of improvisation, storytelling, comedy, farce, satire, and music. Though despite being considered a very British art form, it has its roots elsewhere in European culture.

The earliest and closest source is that of comedia del arte, a mime form from the sixteenth-century streets of Italy. Without words, the stock figures and familiar stories became crucial for understanding, and the comedic, tragedy, rags-to-riches and other tropes continue to resonate throughout generations and across nationalities. Non-verbal communication also relies heavily on physical comedy, and again the slapstick humour and grand gestures flicker through to today.

Similarly, we know that Shakespeare and the Greeks played with gender reversal; Disney has taken classic tales and thrown in songs and characters; celebrities are found in every television programme around; and innuendo is probably the most classic form of witticism.

So why is pantomime sometimes looked down upon? In today’s world of knowing and desire to appear aloof, it can seem frivolous and insignificant. Yet even though the stories are ancient fairy tales, they remain relevant.

It’s not only the morals and journeys, but the way that directors and writers make sure that it is filled with jokes and comments about the past year, and add in up-to-date songs or nuances particular to the local community. Andrew Pollard, the writer of Cinderella at The Queen’s Theatre Hornchurch, which is part of Evolution Theatre’s programme, particularly enjoys its value as a “a community event where people come to let their hair down on a cold winters night and revel in ancient tales that have been passed down from time immemorial.” Evolution is a family run business, and the laughter, tears, cries, emotion, and entertainment that we see on stage is of the kind seen in the family home.

After all, if there was no link to the present, it wouldn’t still be here. And although there was a sharp decline in pantomimes in the seventies, and theatres, like all businesses, are struggling right now, things are starting to look healthier. In fact, panto is back at the London Palladium for the first time in 30 years, with their dazzling interpretation of Cinderella.

Yes it might be a bit silly, but that’s part of the magic. For Andrew, the secret to a good pantomime “is making everyone feel uninhibited and like a kid again”. Given how 2016 has gone with Brexit, Trump, banking, and the rest of the apocalypse, we could probably all do with raising a smile.

What’s value does pantomime have as an art form? Can it even be considered one?
The earliest and closest source is that of comedia del arte, a mime form from the sixteenth-century streets of Italy.
The secret to a good pantomime "is making everyone feel uninhibited and like a kid again".