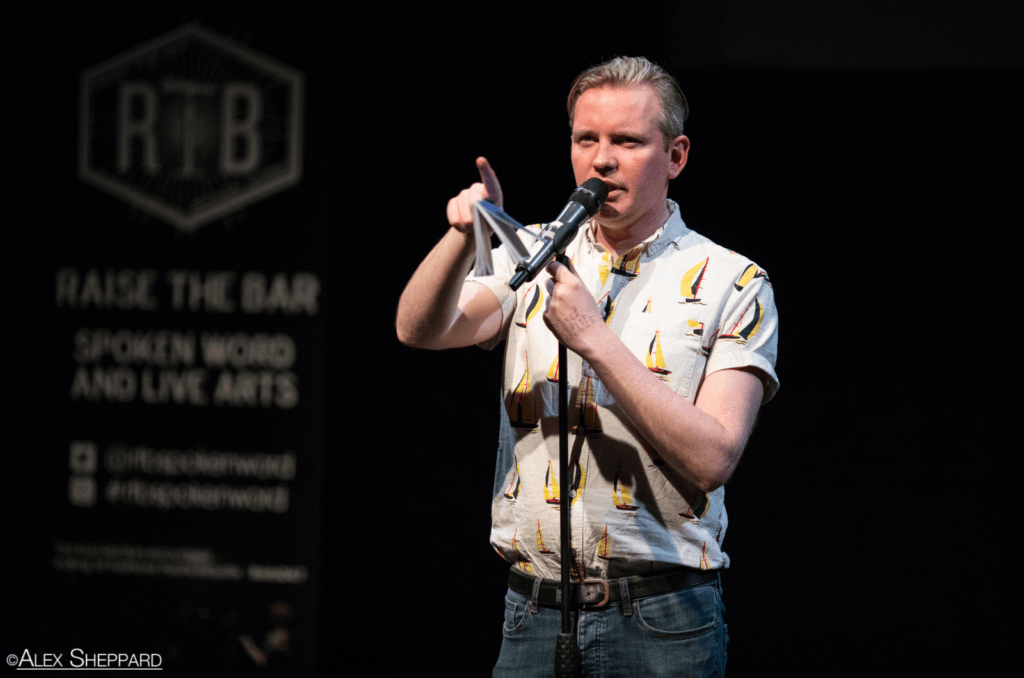 The audience piled into the Arnolfini’s theatre space and, with a DJ playing banging dancehall, we got the sense that this is a poetry night that wouldn’t be lacking in energy. Raise the Bar x LIVEWire promises to be ‘a night of electric spoken word poetry’, and they weren’t going to disappoint.

The event was a collaboration between Bristol’s biggest poetry night, Raise the Bar, and UK leading spoken word record label, Nymphs & Thugs. In their biggest series of events to date, Nymphs & Thugs, who promote events under the name LIVEWire, are currently on national tour. For the Bristol leg, founder Matt Abbott says there was no option other than to team up with Raise the Bar.

Raise the Bar began 5 years ago as Danny [Craft-D] Pandolfi’s open mic night for the creative writing society at Bristol University, it has since grown to be one of the most important organisations in British Spoken Word and their monthly events provide a platform for the best artists from the UK and beyond to perform their work. Tonight’s show features Kevin P Gilday, Jess Green and headliner Salena Godden.

RTB team member Saili Ketabe and LIVEWire’s Matt Abbott were our hosts for the evening, and we were given the low-down on how to show appreciation for the words we are about to hear. Signs include finger-clicking, hums of pleasure and gentle claps that crescendo into foot-stomping if something really blows our minds.

Nymphs & Thugs founder Matt Abbott opened the night as it meant to go on, performing a poem about the polarised social civil war caused by Brexit. He said he had to get the B-word out of the way, and kicks off the topical discourse fuelling much of the evening.

Our first feature act was Kevin P Gilday, Glaswegian award-winning spoken word artist. He gave the audience a moment to attune to his accent, before entertaining us with a seasoned set of Scottish poetry.

His work touches topics such as harmful masculinity, class injustice and the duality of Caledonian identity. He also talks tongue-in-cheek about professional poet jealousy in light of the Nationwide advert, the pain of enduring the self-importance fest that is the Edinburgh fringe (‘mime is in my blood’) and how perhaps poetry has no space for a grown man’s weary compositions and chronic oversharing – oh how starkly wrong.

Kevin’s voice boomed through the room with perfect cadence, revealing a vulnerable core when he opts for ‘the mental health one’ out of two possible sad poems. Finishing with the brilliant ‘How to Spot a Tory’, he solidified success in his Bristol debut. 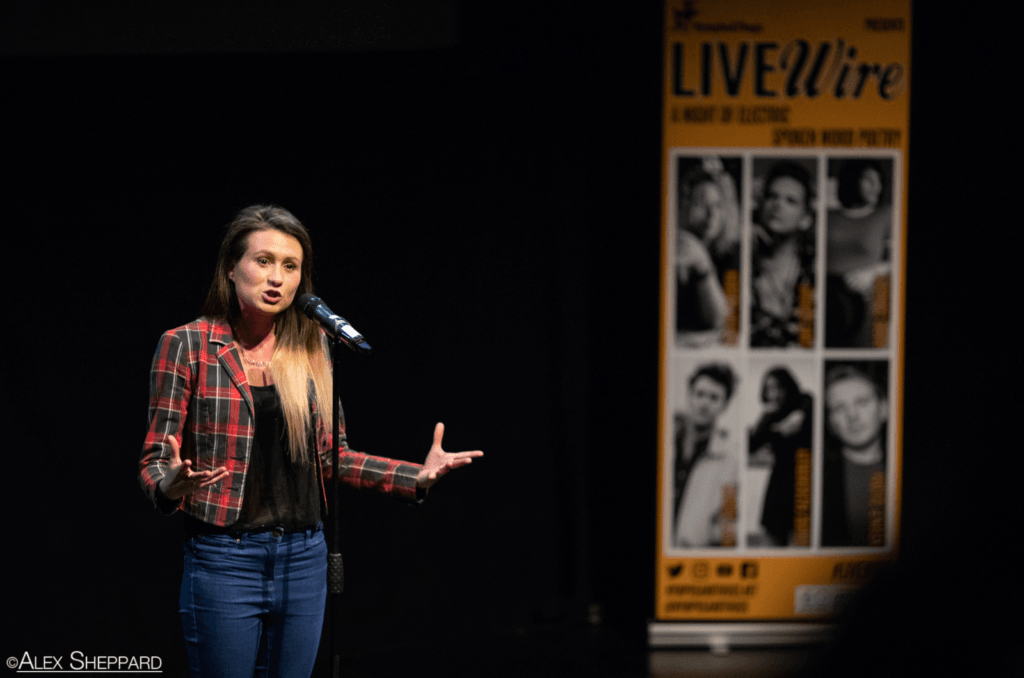 Jess Green is a political poet whose latest book is entitled ‘A Self Help Guide to Being In love with Jeremy Corbyn’. Her voice was one I really needed to hear in the current chaotic climate. Her mum thought after graduation Jess would work for the Labour party, but instead she decided to be a full-time freelance performance poet. Her first poem took us through the struggles this entails.

Multi slam-winning and hitting viral numbers of YouTube views, her poetry tackles the division of the Left and the destruction caused by Tory Britain. From how budget cuts lead to loss of sleep via un-policed student neighbours, to the damaging lies told by Nicky Morgan, Jess Green proves that studying the arts does not hold you back.

With fierce, compelling and charged delivery, Jess’s set had the audience listening intently between laughing at her witty cynicism. She finished with the message that more unites us than divides us, and a moving poem hailing the sacredness of Friday nights in wake of the injustice of 2015 Paris attacks. 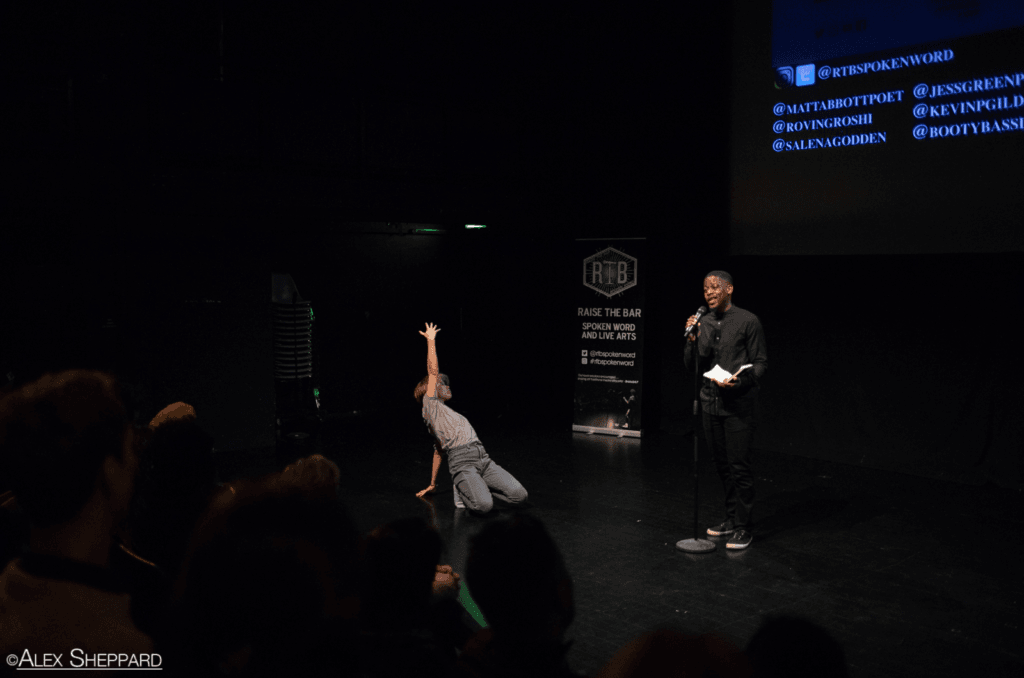 After the interval, our host and RTB poet Saili Katebe cleansed our pallets with something new. The night’s theme of collaboration continued into a duet of Saili’s spoken word and Tim Lo’s interpretative movement. The mixture of mediums made a stunning performance, a slick and sombre conversation between dancer and poet, the sense of movement in the language beautifully matched on stage.

Before introducing the headliner, Salena Godden, Matt Abbott gives us some more background on how his Spoken Word record label, Nymphs & Thugs was created with the involvement of Salena Godden. 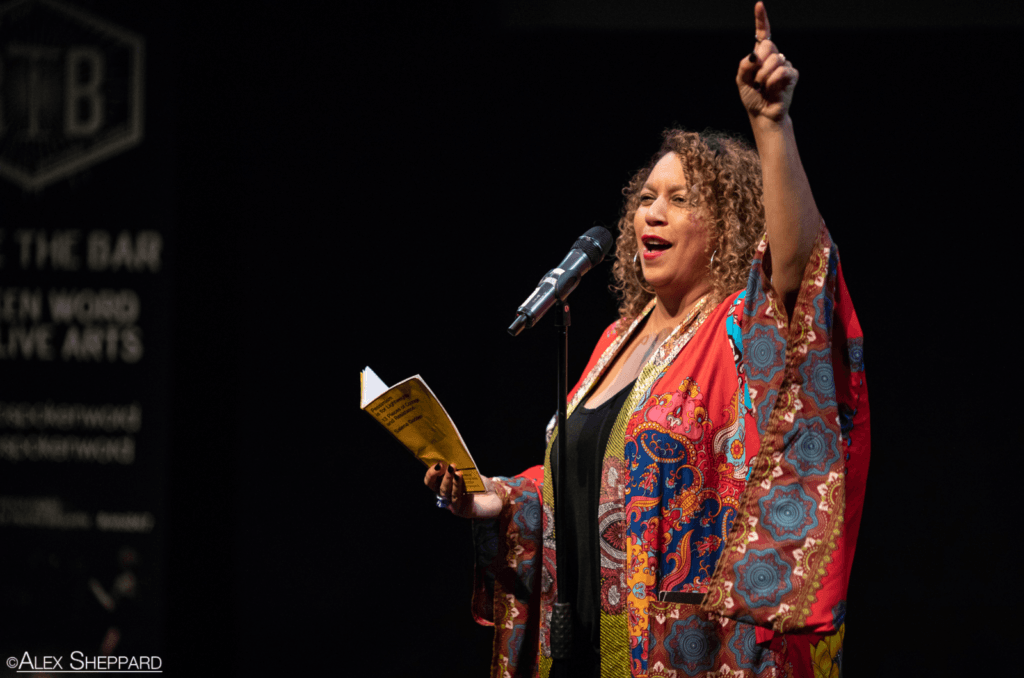 Plans made over pints in Camden led to the creation of Salena’s album, LIVEWire, which gave its name to the label’s events.

The album was shortlisted for the prestigious Ted Hughes award, and the night’s set left it clear as to why. Her entire presence exudes light and colour, she quickly let us know that pessimism is for lightweights, her poetry delves in courage and resistance.

Starting with a poem exploring human nature through the act of sharing soup, the warmth trickled into a piece she wrote for Extinction Rebellion about needing sun cream in February. Themes of spreading warmth and light seeped through her outfit, in shining gold boots and a sequinned red kimono.

Pulling pages from its pockets, Salena treated us to an exclusive chapter from her new book, written in the voice of Mrs Death, invisible as a black woman. Even in darker territory her work conducts love, urging us to celebrate the living and recognise the heroes in the now, as well as those who blazed a trail.

Salena’s last two poems were the most stirring and vivid. ‘I Want Love’ was written when she was 17 years old and is a heart-bursting, hilarious outpouring of passion and enthusiasm, the kind we tend to lose down the years, but shouldn’t.

She finished to cheers and roars of laughter from the audience, with a period poem that has outdone any I’ve heard before. After leading the whole room in singing ‘Anything you can do, I can do bleeding!’ she takes a big, red glittering bow. 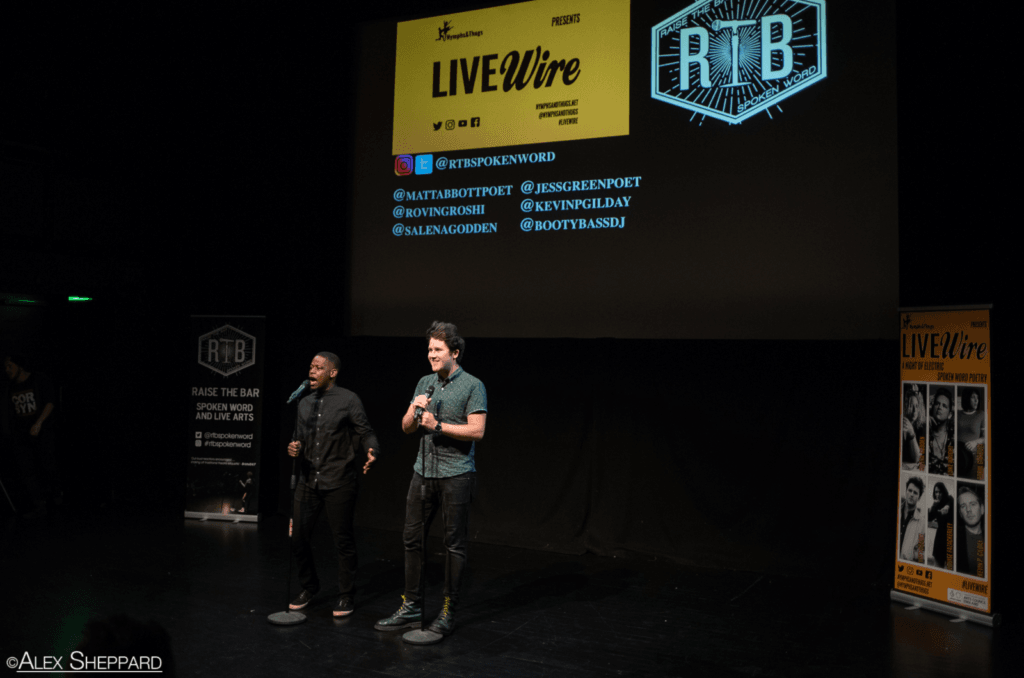 Both Raise the Bar and Nymphs & Thugs aim to change the perception of what poetry is, and for anyone who didn’t consider it ‘electric’ beforehand, they’ll certainly have been left pleasantly shocked.

Those familiar with the feeling at the end of a quality spoken word event will know it’s like a hug. A thing of warmth and comfort that may have been sparked by sadness, or anger. Hearing people speak their truths, challenge the status quo and share their stories can be hilarious, moving and inspirational. And with the talent on display at the Bristol event the poetry crowd was wholly satisfied.

For the rest of LIVEWires tour and upcoming RTB nights, take a look here: Nymphs & Thugs and Raise the Bar

We were given the low-down on how to show appreciation for the words we are about to hear. Signs include finger-clicking, hums of pleasure and gentle claps that crescendo into foot-stomping if something really blows our minds.
[Salena Godden's] entire presence exudes light and colour, she quickly let us know that pessimism is for lightweights, her poetry delves in courage and resistance.
Those familiar with the feeling at the end of a quality spoken word event will know it’s like a hug. A thing of warmth and comfort that may have been sparked by sadness, or anger.