Chila Kumari Singh Burman has been busy during lockdown. She has been working on commissions and is in the midst of planning work for the Tate Britain’s Winter Commission. More immediately, she’s exhibiting a series of moving image works at the Output Gallery in Liverpool.

Burman, who works across painting, print, film, installation and performance, has a prolific output. She doesn’t consider herself to have a strategic approach to her work, instead, she has spent her professional life responding to opportunities as they have presented themselves. Burman was one of the first South Asian women to make political art and was one of the leading artists during the socio-political climate of the 80s and 90s which shaped black British art.

Burman’s work has been exhibited in galleries across the world and is held in private and public collections including Tate, Wellcome Trust, Victoria and Albert Museum and the Devi Foundation in New Delhi. At Output Gallery, Burman is showing a series of video works, the most recent made during lockdown. I met with Burman on Zoom to talk to her about her current exhibition, the Tate Winter Commission and her political roots.

What is immediately apparent about Burman is her ability to tell captivating stories that bring to life her childhood and early years as an artist. It’s a characteristic she credits her parents, “They are both entertainers, they’re both performance artists because my dad would entertain everybody in our house at parties and my mum would at temple and at weddings.” As soon as she hears my accent, she tells me of how she used to go to the Irish youth club on a Thursday with her sister. It was the only night she was allowed out and it’s when she danced like she had never danced before.

Burman’s work is rooted in the themes of identity and memory. Her work features biographical elements, most notably objects related to the ice cream business her father set up and the colour and symbolism of her Indian culture.

‘Candy Pop and Juicy Lucy’ is a vividly coloured multi-layered, dream like psychedelic moving image work featuring pop images of ice cream cornets, ice lollies and an ice cream van with a soundtrack of ice cream van jingles that take you straight back to your childhood.

The work is saturated in colour. ”I realised I was good at colour. I think it was because me dad’s got an ice cream van full of colour. We’d go and see Bollywood films every Sunday. OTT colour. The Hindu temple was full of colour. Indian colour gods, when you wake up in the morning there’s calendars all around the house.” 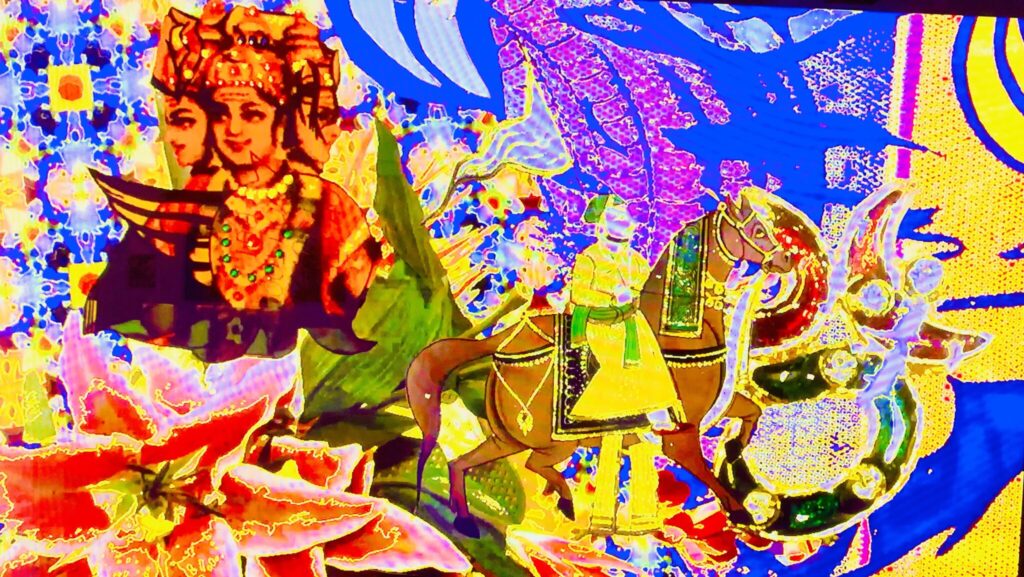 Burman grew up in Bootle, in a working class family who emigrated from India in the mid-1950s. Burman’s father was a bespoke tailor and a magician who worked in the Dunlop factory in Speke before buying an ice cream van and setting up a business selling ice cream on Freshfields beach. Burman’s work inhabits the space in-between her Indian cultural heritage and the western culture she grew up in. Existing within both, but beyond her dual cultural heritage.

Growing up, her father would tell her stories of partition and challenge what she was learning at school. She says she was politicised after spending three months in India before going to art college, but even before that, she was exposed to politics, “My sister’s ex-husband, Mike Fitzgerald, he used to come to our house when I was sixteen and he was already into Angela Davis and I had posters of Angela Davis in my bedroom. He set up the Open University with Professor Stuart Hall. I was already doing all this stuff. My brother was political, and all his friends were political. It was the punk days and that’s political. This was all fizzing in my head.” 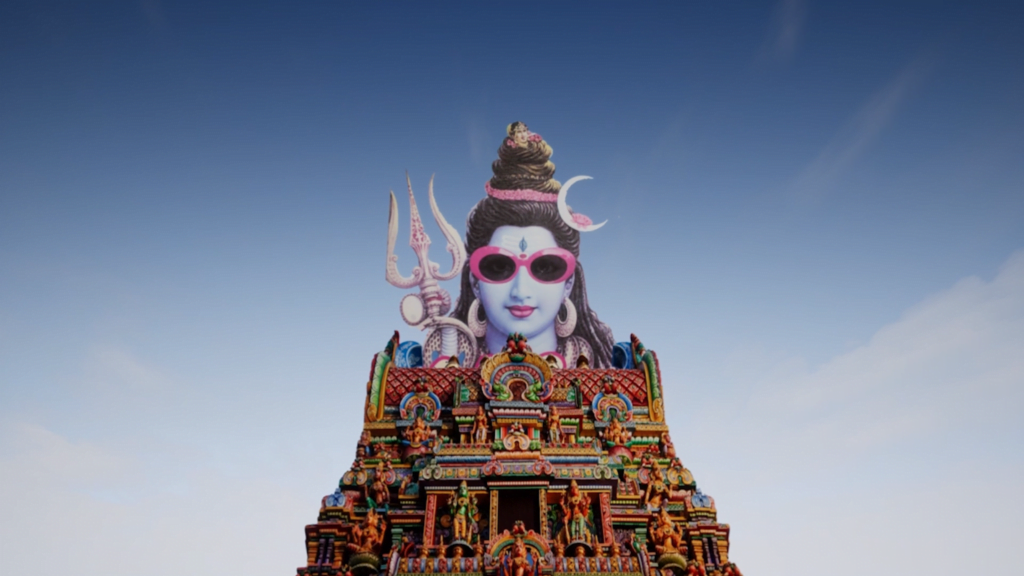 ‘Dada and the Punjabi Princess’

‘Dada and the Punjabi Princess’ (2017) is a multi-layered, psychedelic moving image. Indian dancers move across the screen in a series of movements that at times resemble traditional dance and others, martial arts movements. A central figure responds to what is happening off screen. Text is layered over the images in Devanagari style script, ‘Multiculturalism is coming unstuck’, ‘Is news fake or real?’ The kaleidoscopic animation is underscored by an uplifting Punjabi folk song with a drum n’ bass breakbeat mixed by her brother, Ashok. “The whole premise of the film is about a girl who goes through the world with all the emotions, like Lara Croft. All the emotions that us girls have to deal with; joy sadness depression, and then she comes out on top.”

When Burman showed this work at screening of Black and Asian films ‘The Time is Now?’ at Nottingham Contemporary she was asked by a male Asian arts professional if the Dada in the title was a reference to her father: “It was classic, either I’m not supposed to know about the history of art and I’m not supposed to know about something as political as dada and surrealism.” Burman felt she had been stereotyped despite having spent her art career challenging and subverting representations of South Asian female identity. The Dada reference in the title is to the Dada art movement. 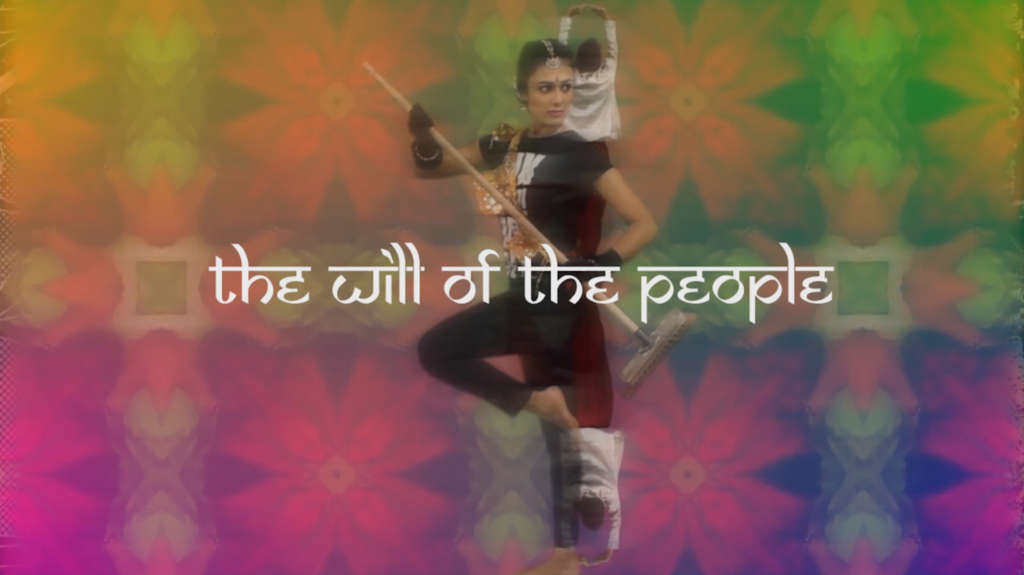 ‘Dada and the Punjabi Princess’

At the beginning, though, Burman says her work wasn’t overtly political, “My work at Leeds polytechnic, I would say that was more abstract political work. I was doing work on cultural heritage and identity but you couldn’t explain to the tutors what it is you were doing because they wouldn’t get head nor tail of it so you had to cover it.” Her work was informed by the activities she engaged in and the people she met. While at art school, Burman set up the first Asian women’s refuge. She also joined the women’s collective which produced Mukti, a magazine for South East Asian women which was published in six languages.

Mukti was one of a few publications at the time shaped the development of black feminist theory. It focused on the interconnected nature of gender, race and class oppression before contemporary theory of intersectionality was developed.

Burman remembers, “I had started reading black feminist theory from America because there was no literature here. With these women we were discussing all kinds of issues. My brother who lived in Sheffield, his girlfriend was English and she started talking about [being] a feminist; she was doing sociology. I said to my brother’s girlfriend, I am a black feminist.” 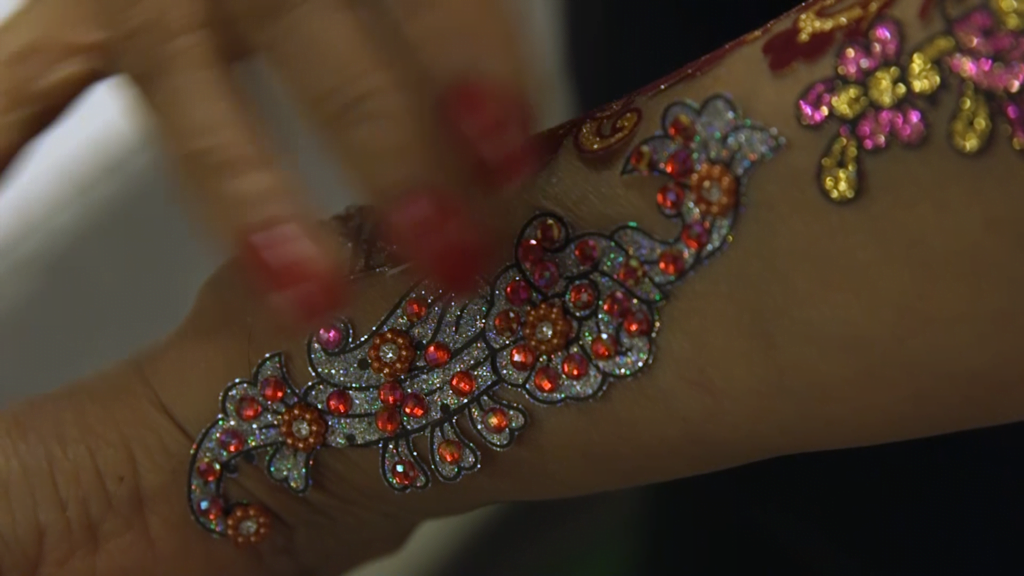 Burman has used both her body and traditional Asian decorative elements frequently in her work to challenge and subvert stereotypical representation of South Asian female identity. She says, “Even when I’ve got bindis, I never use them like you’re meant to. It’s like an innate thing where I do the things that are the opposite. I hardly ever wear bindis where you are supposed to. I would say I use them in my work slightly subversively.”

Burman refers to ‘Bindi Girls’, a series from 2009. Burman used bindis, the colourful dots applied to the centre of the forehead, traditionally a signifier of married women, in explosively colourful mixed media works of women who were confident, sexual and sexualised, challenging conventional images of South Asian women. 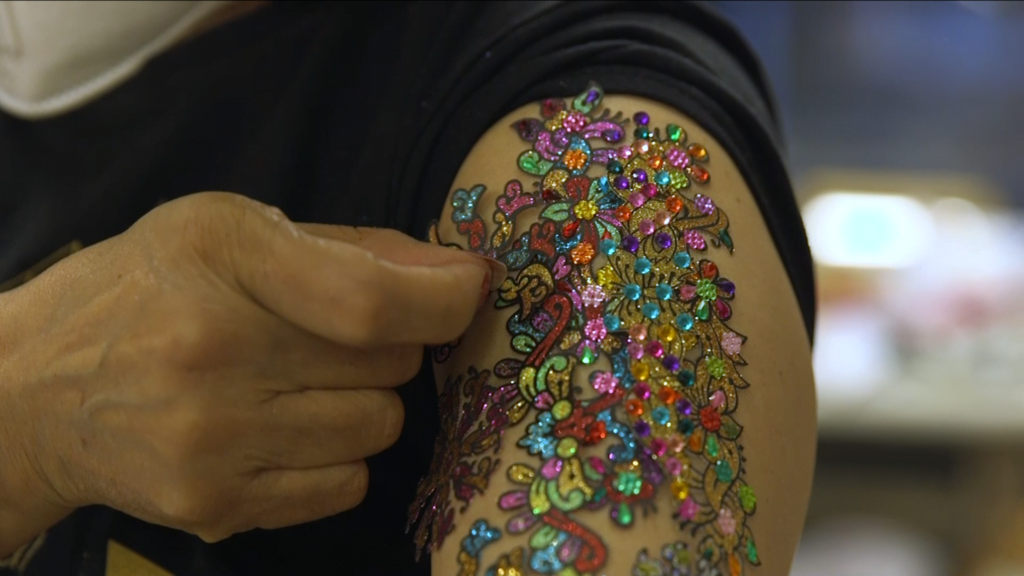 Talking about ‘Armour’ (2020), Burman suggests it is a continuation of the theme of using Asian decorative symbols in a subversive way, “I had already covered my face in bindis before when I was doing a project in New Delhi, so to cover my body it was just…”

‘Armour’, made during lockdown, is a collaboration with video artist, Susanne Dietz. Burman removes decorative, jewelled body stickers from their packets and one by one covers her left arm as the camera follows her movements. Burman adds each one to her arm until there is no longer space, forming a tattoo-like protective sleeve.

Burman says it’s sometimes hard to believe that she can put her cultural heritage on a huge façade like Tate Britain, but believes that it’s a positive. “It’s good to celebrate something from another culture on it.” Reflecting on her career, Burman says, “I don’t really know what I’m doing half the time. I don’t pre-plan anything. I just follow my nose. I think I just pick things up and think that makes sense now.” And she’s right, it does make sense now.

Tagged with: art, artists, Chila Kumari Singh Burman, colour, cultural, Heritage, ice cream, identitity, Indian, interview, political, Tate
Burman's work features biographical elements, most notably objects related to the ice cream business her father set up and the colour and symbolism of her Indian culture.
”I realised I was good at colour. I think it was because my dad’s got an ice cream van full of colour. We’d go and see Bollywood films every Sunday. OTT colour."
“I don’t really know what I’m doing half the time. I don’t pre-plan anything. I just follow my nose."