‘Temporary Spaces’, curated and edited by Astra Papachristodoulou and Nic Stringer, and printed by Pamenar Press, pulls double duty as both an exhibition catalogue and a poetry anthology. The book provides a dedicated space for the poets featured within, whose work otherwise presently competes for space with the tables and chairs of The Poetry Society Café in Covent Garden. It is perhaps no coincidence that the cover design (Hamed Jaberha) features what appears to be a coffee stain, gesturing at once to both the temporality of print media, and the temporary space that the exhibit itself occupies. It all feels like a rather revealing synecdoche for the marginal status of visual poetry as a whole— a composite form caught between many cloistered poles. The quality of the anthology, however, also reveals what a great shame that marginality is.

‘Temporary Spaces’ is richly diverse and encompasses a wide variety of poetic and artistic practices: from concrete poems to polyphonic poems to object poems, or rather, photos of object poems. Stephen Emerson’s series ‘Ghosts’ contributes an interesting crease to the book and exhibition’s “celebration of the ephemeral”. It does this both as a work in itself, whereby residual poetic filaments— poem ash, poet’s breath, pencil lead— are captured and displayed in vials, but also in its reproduction in print: whatever essential ‘Ghosts’ are stored in those vials, do they survive being photographed and reprinted? The ‘Ghosts’ of the object poems once again become ‘Ghosts’ of photography. This process of transcription significantly transforms much of the work in the anthology, knotting and complicating the various pieces’ engagements with temporality and spatiality.

Matt Martin’s ‘destroying angel’ is similarly marked by transposition, though more so here by the photography that took place as part of its initial composition. The fungal poem comprises a series of mushroom caps resting in soil, each with word fragments smeared on top in marker pen, and with organic lineation. Mushrooms exist on the cuff edge of subjective time, between rot and rebirth. They’re invaders that make headway into lawns in the morning, and are often gone by the evening, foraged by slugs or squirrels. They belong to the earth, but as domesticated, farmed products, also to the Anthropocene. 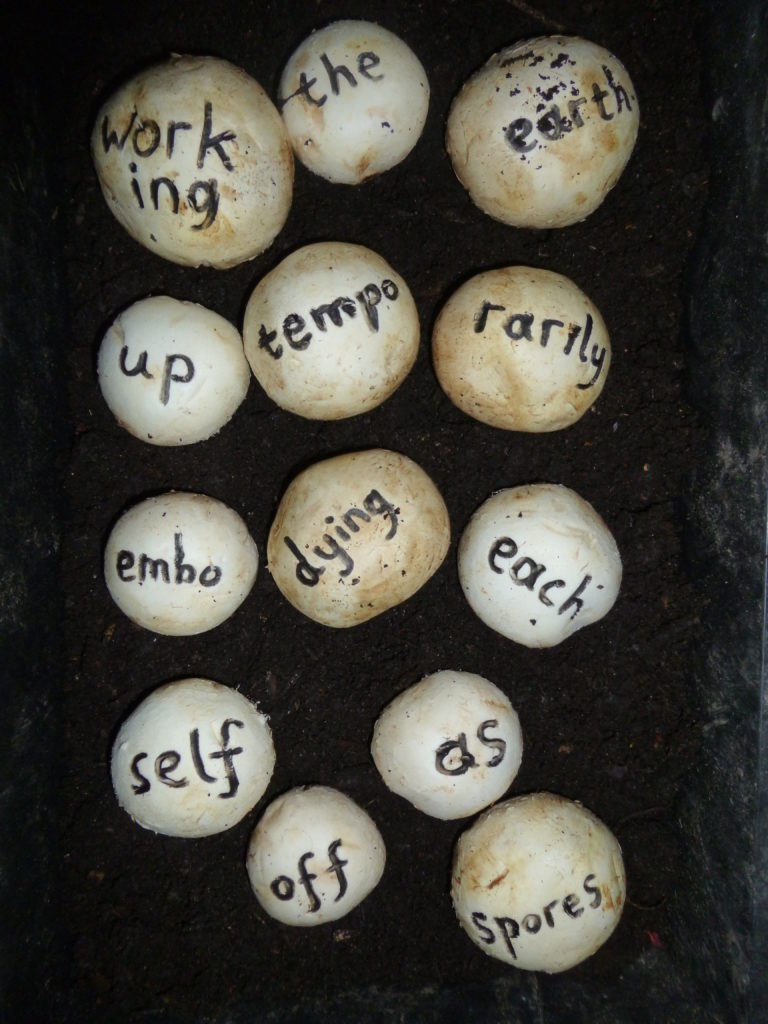 In photography, however, the wet blackness of the soil has been crushed into the sheer blackness of space, and each white cap is a planet around which each imprinted letter must orbit, warped by the mushrooms’ gravitational curvature. Our engagement with the text is shaped by this yoking together of the cosmic, hallucinogenic and earthly, where the isolating circumstances enjoyed by each word fragment inspire new and transformative ways of reading each line: “death captured” moves first through “death cap”; “up temporarily” through “up tempo”. The visual elements of Martin’s work directly inform our reading of the textual elements. This is powerfully true, of course, for all the work in this anthology.

Astra Papachristodoulou’s poems ‘Side Effects’, ‘Station to Station’ and ‘Skylight Vignettes’ have undergone a similar transformation. Each poem is a constellation of points, lines, letters and verse, reinstalled from the white page onto reclaimed wood, and then once more into print. The celestial patterns are at once nostalgic and expansive, spanning “grains of cocaine across the cosmos” and “parallel realities”.

As with the Futurist concrete poems which Papachristodoulou cites as inspirations, these constellation poems also challenge the reading process, with the intended lineation indicated by Greek script, letters from which accompany each star point and poem fragment. The visual complexity of the wood boards onto which the poems are mapped requires us to lean in and squint in order to make out the words belonging to each star-point, and in doing so revealing the pixels of the book’s printing process and exposing the double-copy at play in this reproduction too.

As an anthology, ‘Temporary Spaces’ provides a compelling entry point to an underappreciated medium, with pieces from the aforementioned poets along with excellent, thoughtful work from Claire Collison, Sarah Dawson, Paul Hawkins, James Knight, Stephen Mooney, Michelle Penn, Silje Ree, Nic Stringer and Simon Tyrrell. As an exhibition catalogue, however, it articulates many of the challenges faced by visual poetry; the challenges of transposing the form from the small art spaces it predominantly inhabits to print, and to a wider, more connected community. Those challenges, and their wrinkling emergences in the printed anthology nonetheless correlate with and contribute to the problematics of spatiality and temporality that the works within seek to tackle.

Tagged with: anthology, book, catalogue, concrete poems, exhibition, object poems, photography, photos, poetry, polyphonic poems, print, review, temporary spaces, visual
Residual poetic filaments— poem ash, poet’s breath, pencil lead— are captured and displayed in vials
In photography, however, the wet blackness of the soil has been crushed into the sheer blackness of space, and each white cap is a planet around which each imprinted letter must orbit, warped by the mushrooms’ gravitational curvature.