As part of a series in partnership with Arts Council England, TSOTA will be featuring several Northern venues supported by funding distributed by the Arts Council, unable to take income from their usual live music programme during the COVID-19 pandemic. This series will explore how some of these venues have navigated the lockdown, thanks to this funding.

For our second feature, we spoke to Rose Wilcox of The Leadmill, Sheffield’s popular club-venue, about how they have adapted, and persisted, through the pandemic.

The Leadmill first opened its doors in 1980 and soon became the go-to place for Sheffield’s youngsters. Over the years, it has attracted eclectic groups of supporters each valuing a distinctly different connection to the building.

If you ask those who attended in the 80s, they’ll probably tell you it was the first place they sampled a vegetarian curry, or some might even recall auditioning there to be an extra in the now cult movie The Princess Bride. And if you ask a younger audience, it’ll likely be where they saw their favourite band and made the most of £1.50 vodka doubles afterwards.

Despite always being able to reposition itself and entice fresh audiences, the pandemic threatened to see the venue close its doors for good. Speaking with the Commercial Manager, Rose Wilcox, she provided an insight into what life has been like for this grassroots music venue and how the Government’s Culture Recovery Fund has provided the resources to keep their ethos alive.

When the long-term implications of lockdown became apparent, Rose recalls, “the immediate worry was about staff…you see your income just stop.”

In a panic to recommence cash flow, the management found innovative ways to ensure they stayed afloat – from selling a guitar signed by the Arctic Monkeys grafted from their infamous dancefloor, to auctioning off Alex Turner’s Telecaster, to parting with Royal Blood’s infamous coffin – every option was on the table to ensure that they were not the ones who oversaw the venue close.

Aware that their supporters were themselves struggling financially, the team at The Leadmill knew they could only rely on them for assistance for so long. The Culture Recovery Fund award provided the external support needed to steady the ship and ensure the venue’s survival. “When the fund was announced,” Rose tells us, “it was such a relief, it meant we could calm down and concentrate on engaging with people again.” 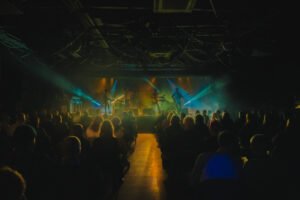 The break in programming and the continued financial support also gave staff the opportunity to reflect on what a special place The Leadmill truly is. It’s not just one of the most popular places in Sheffield for live entertainment – it’s a space where people forge the sort of relationships that have been sorely missed over the course of lockdown.

“People might think of it as a nightclub that is dingey and dark, but it’s actually a place where people have met a solid group of mates, met their other half, and have been inspired. The money we got through the Culture Recovery Fund allows us to do what we do, do it better and do it on a larger scale so we can provide those memories to more people.”

These moments of reflection have allowed the venue to do more than just recover, but to reinvent itself yet again. “The funding has allowed us to reassess our position and put on a range of exciting new events.” Rose also notes how it provided the space to “build so many relationships over this period of closure… it has highlighted that these spaces are just as important as art galleries, museums, theatres – it has helped us have city-wide conversations.”

The funding has evidently provided an injection of confidence to work with a range of groups to put on events that would otherwise have sat outside their remit. Whether it’s working with charities to put on drag shows or connecting with Black, Asian and ethnically diverse youth organisations to host the city’s only underage afrobeat night, The Leadmill refuses to place limitations on its own self-identity. Rose says passionately: “the ultimate goal is to provide a diverse range of events so that we’ve got even more people that are able to say how much they used to love coming here.”

Excited by the opportunity to put on new events that this fund has provided, the staff are raring to embark on a new chapter, especially with July 19th bringing the easing of restrictions and The Leadmill being able to hold its Grand Reopening.

Through a period of adversity, The Leadmill has remained true to itself. This is evident from Rose’s joy to see Nev on the door again – the veteran bouncer whose atypical combination of warmth and humour is cherished by punters and staff alike – a stark reminder of what could have been lost.

See the full list of the Leadmill’s reopening programme here.

You can find out more about Arts Council England here.

Tagged with: Arctic Monkeys, arts council, Arts Council England, Arts Council Funding, covid-19, grassroots venue, interview, Music venue, recovery fund, reopening, Sheffield, Sheffield music
The Leadmill is not just one of the most popular places in Sheffield for live entertainment – it’s a space where people forge the sort of relationships that have been sorely missed over the course of lockdown.
"The money we got through the Cultural Recovery Fund allows us to do what we do, do it better and do it on a larger scale so we can provide those memories to more people."
“The ultimate goal is to provide a diverse range of events so that we’ve got even more people that are able to say how much they used to love coming here.”