Jars of tears and slumber sounds: ‘Going Ghost’ @ The Place 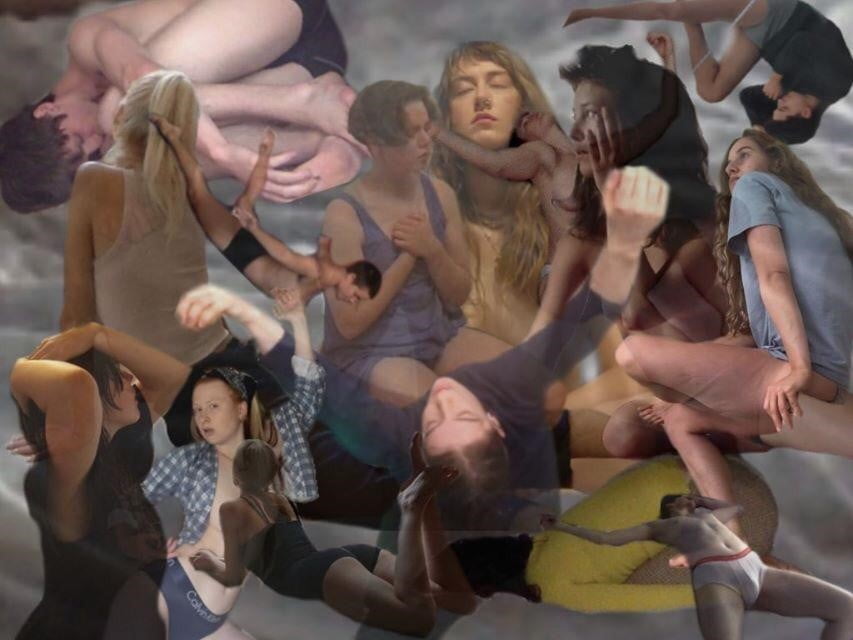 When attending a show, there is a predictable pre-performance dance that is suggestive of the theatre itself. It is dusk, a tux is now a slick of lipstick. You flick through the programme, eying up your fellow audience members. There are murmurs as a famous art critic is spotted, someone by the bar yells “Merlot or Malbec?” to their friend. The room hums, patrons fidget, the announcement bongs and as the countdown begins there is a sudden rush towards the loos.

It is impossible to recreate the sensation of being sat with a group of strangers to watch other strangers create art. Somehow being shoulder to shoulder in a shadowed sea of onlookers provides an evocative anonymity and solidarity: A collective inhale or laugh is genuinely warming; restrained tears are secrets in the dark; being moved by beauty, alone in a group, becomes a sustaining memory.

The graduation performance of The Place, the culmination of three years of work, was to lose this integral component. The London dance school’s final show would have been a week of sold out live performances, with four choreographers working with different groups of the graduating year. Finding themselves disseminating their project online for the first time, ‘Going Ghost’ is the outcome of choreographer Leah Marojevic’s seven week work with fifteen dancers. The website acts as a portal, as much an emotional and artistic retreat as a dance presentation. 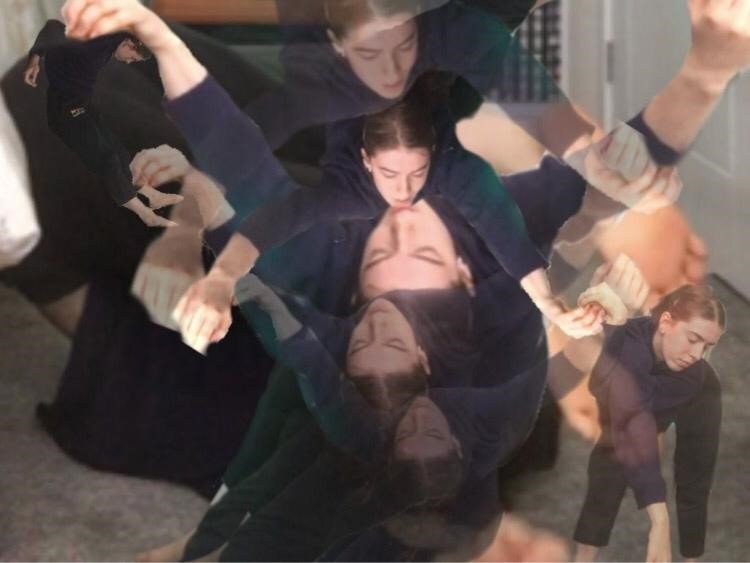 The answer to the question of how you recreate a performance online, is that you don’t, it’s useless. Nothing is less transporting than a small brightly lit computer screen: synthetic, digestible, distractible. Instead, a site has the power to invite intimacy. Unlike a show, there is an opportunity to see each dancer up close, as an individual, laid bare for your eyes only. Equally you have no restrictions. You may be in bed, or chomping on a banana. You may be on your feet, dancing. It is not a cam show, but a site has the ability to be as private and as personal, and for both parties. ‘Going Ghost’ plays on this idea, inviting you into the ‘rooms’ of each dancer, to witness their darkest secrets as poems, music, photos and videos. Because ‘Going Ghost’ is unable to be physical, it is obsessed with the non-physical, the transient, and the emotional.

For my first visit to goingghost.net I scroll between dancers undirected. The site invites grazing. You click through the welcome screen where a tongue licks, a body ripples, a dirty foot waves hello. A Halloween sheet ghost has a hand on its knee, a woman is in a suspended crab shape, hair dangling in the matrix. An instant blue and green flash, a couple embrace, the screen twists, the performance has begun: both rough and sensual as body cut-outs are layered onto film.

On the homepage neon words invite you to browse, sense, feel, materialise, meet. But in each case encounters are promised with the immaterial: their presence, sweet sex dreams, tears in jars, slumber sounds. It’s ambiguous, and I like it. Intimacy has been hard to come by over the last six months, and ‘Going Ghost’ is seductive in its uncompromising tenderness. “We are expanding. We are everywhere. We are huge,” it declares. 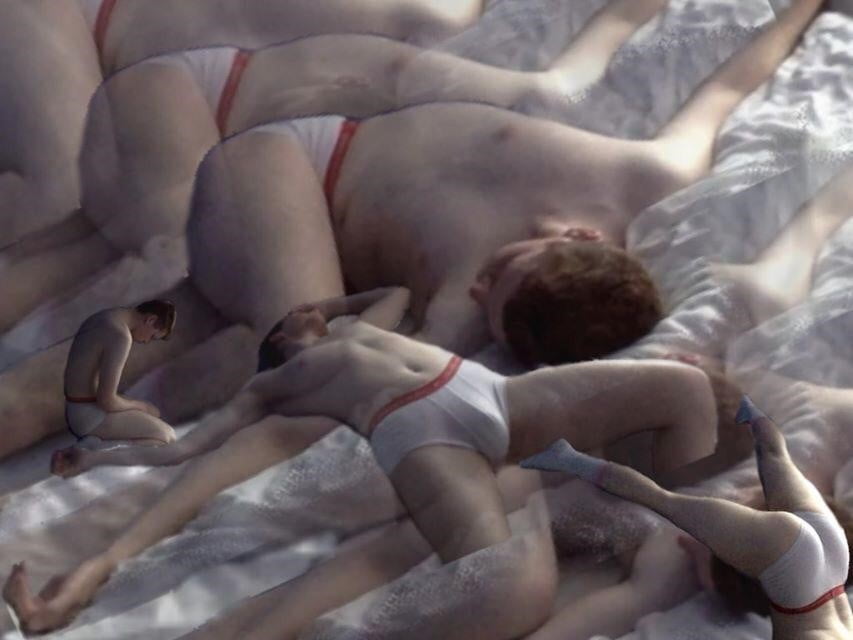 Underneath the pink and green texts are windows into each dancer’s space. The thumbnails too are images of bodies and the page morphs into a giant collage. Each ‘room’ has similar components: a video of the dancer’s movements, a poem in neon, a personalised ten minute soundtrack by artist Samir Kennedy and photos of each dancer’s actual room taken on a disposable camera. Photos are taken in bed, asleep. Photos are taken of their tears, collected in jars. Photos are of body parts, of the artists dressed as ghosts, hidden by white sheets, of windows, of notebooks and of gardens. The dancer’s personality then adorns the scene.

Within the emotional cyclorama of ‘Going Ghost’, I find further intimacy in each dancer’s video. With digital collaboration from artist Erika Karina, each film flicks to a three dimensional space where photos become expanding walls of each ‘room’, and cut-outs of the dancers leap or hang, equal elements in their digital cosmos. Scenes are crude and honest, as you would imagine people’s rooms to be, and the images are reflective of the workshops the dancers completed. These exercises included using sleep recording apps, dressing in drag on Zoom and physical imaginary improvisations – all tasks created to encourage the fantastical, the spiritual and the intangible.

On 17th July, the launch date of the site, Marojevic invited spectators to join the dancers for a half an hour live performance. But there was a twist: there was no link to their performances. They were alone, dancing in their rooms, and we were asked to imagine their movements based on the fragments of their lives and spaces that are presented. She asked the dancers to dance thinking of each other, also imagining each other’s rooms. For the cynic, this would be a step too far, the emperor’s new clothes in dance form. But ‘Going Ghost’ has no time for the sardonic. It rages against the past five sterile months, and our aseptic future. If we are unable to touch, it says, let’s dream of touch; let’s grieve and imagine a different reality, one which the audience is invited to.

But despite this irresistible defiance there is something just plain sad about the young dancers’ last hurrah being an imagined one, and Marojevic’s empathy towards their newfound graduation is evident throughout the project. Their unconscious movements, captured via Zoom call, are hypnotizing but undeniably muted. The dancers’ poetry too recalls sorrow: “Will cry if I can actually touch you guys, Crying I cried I will cry,” writes Lauren. “Omg actually have tears in my eyes, With grey looking skies, What’s the opposite of a boner,” writes Niamh.

In this way ‘Going Ghost’ is a site of two parts: it is humorous and frank with knicker-clad buttocks shaking, belly buttons next to smiley buttons, captions (“Bonni’s Recipe 2020” says one, next to a photo of Venla in the bath) and photos of friends. But it’s mournful too. The idea of expanding beyond the confines of your four walls and your body is intoxicating, but equally tragic: ghosts are the antithesis of the vividity of life. Rather than laughter, delicious smells, hot kisses and bleary eyes in the sun, ghosts are shadows, a gauze of memory. Ghosts bridge a world that the young should not inhabit.

Two weeks later I am visiting ‘Going Ghost’ again. Each visit is a reminder to treat yourself kindly: staring at the fluids of strangers halts self-conscious convictions. Unlike a live performance I can re-read my favourite poem, repeat Kennedy’s haunting tracks, and I notice humour or patterns that I missed on my first visit. This way ‘Going Ghost’ becomes bodily in its infectious atmosphere. Without a doubt Marojevic and the graduating dancers have put on a wildly moving show.

Tagged with: choreography, dance, dancer, going ghost, London, online, poetry, Room, school, screen, sensual, the place
In each case encounters are promised with the immaterial: their presence, sweet sex dreams, tears in jars, slumber sounds. It’s ambiguous, and I like it. Intimacy has been hard to come by over the last six months, and ‘Going Ghost’ is seductive in its uncompromising tenderness.
Unlike a show, there is an opportunity to see each dancer up close, as an individual, laid bare for your eyes only. Equally you have no restrictions. You may be in bed, or chomping on a banana.
‘Going Ghost’ has no time for the sardonic. It rages against the past five sterile months, and our aseptic future. If we are unable to touch, it says, let’s dream of touch; let’s grieve and imagine a different reality, one which the audience is invited to.