Marc Cowan is an artist and designer based in London, England.

The following article was written during the height of the Picturehouse Living Wage campaign that ran across 6 cinemas and became the longest running strike in UK history. The precarious workers-mobile, a modified Reliant Robin, got on board and recreated the article as a relief print.

The campaign has been widely supported by creative industry leaders, from Ken Loach and Will Self to Jo Brand and Jeremy Deller. Picturehouse has since lost the right to host the Human Rights and London Film Festival and in 2019, following a lengthy court case, were found to have illegally dismissed a number of union representatives. They still pay their staff below the Living Wage. 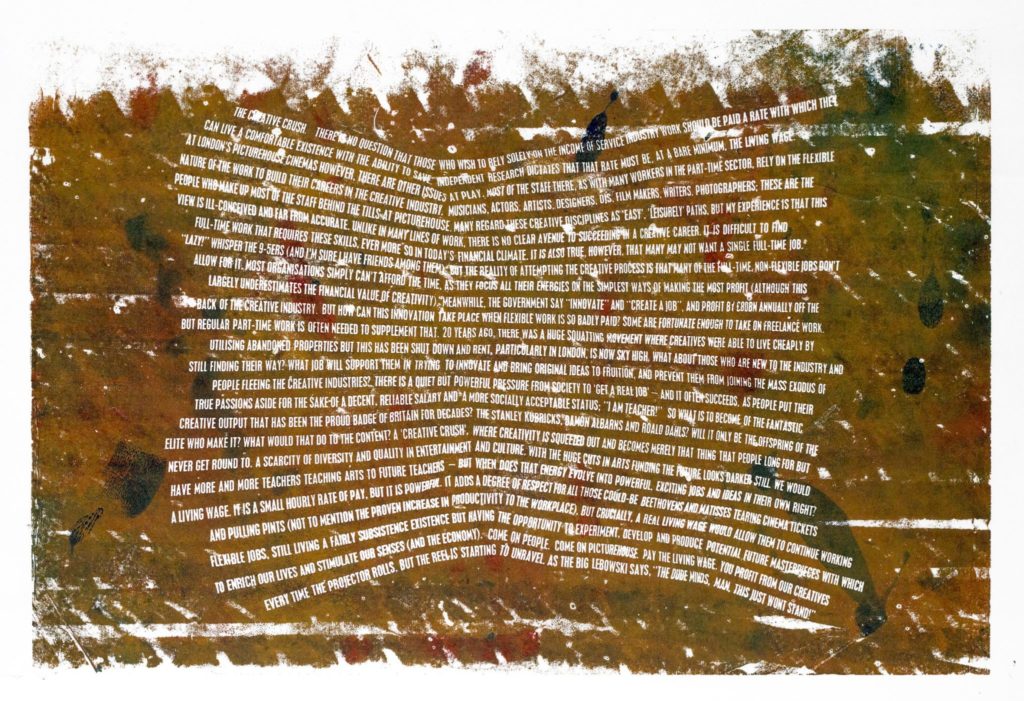 There is no question that those who wish to rely solely on the income of service industry work should be paid a rate with which they can live a comfortable existence with the ability to save. Independent research dictates that that rate must be, at a bare minimum, the real Living Wage.

At London’s Picturehouse cinemas however, there are other issues at play. Most of the staff there, as with many workers in the part-time sector, rely on the flexible nature of the work to build their careers in the creative industry. Musicians, actors, artists, designers, djs, film makers, writers, photographers; these are the people who make up most of the staff behind the tills at Picturehouse. Many regard these creative disciplines as ‘easy’, ‘leisurely’ paths, but my experience is that this view is ill-conceived and far from accurate.

Unlike in many lines of work, there is no clear avenue to succeeding in a creative career. It is difficult to find full-time work that requires these skills, ever more so in today’s financial climate. It is also true, however, that many may not want a single full-time job. “Lazy!” whisper the 9-5ers (and I’m sure I have friends among them), but the reality of attempting the creative process is that many of the full-time, non-flexible jobs don’t allow for it.

Most organisations simply can’t afford the time, as they focus all their energies on the simplest ways of making the most profit (although this largely underestimates the financial value of creativity). Meanwhile, the government say “innovate” and “create a job”, and profit by £80bn annually off the back of the creative industry.

But how can this innovation take place when flexible work is so badly paid? Some are fortunate enough to take on freelance work, but regular part-time work is often needed to supplement that. 20 years ago, there was a huge squatting movement where creatives were able to live cheaply by utilising abandoned properties but this has been shut down and rent, particularly in London, is now sky high. What about those who are new to the industry and still finding their way? What job will support them in trying to innovate and bring original ideas to fruition, and prevent them from joining the mass exodus of people fleeing the creative industries?

There is a quiet but powerful pressure from society to ‘get a real job’ – and it often succeeds, as people put their true passions aside for the sake of a decent, reliable salary and a more socially acceptable status; “I am teacher!”

So what is to become of the fantastic creative output that has been the proud badge of Britain for decades? The Stanley Kubricks, Damon Albarns and Roald Dahls? Will it only be the offspring of the elite who make it? What would that do to the content? A ‘creative crush’, where creativity is squeezed out and becomes merely that thing that people long for but never get round to. A scarcity of diversity and quality in entertainment and culture. With the huge cuts in arts funding the future looks darker still. We would have more and more teachers teaching arts to future teachers – but when does that energy evolve into powerful, exciting jobs and ideas in their own right?

A Living Wage. It is a small hourly rate of pay, but it is powerful. It adds a degree of respect for all those could-be Beethovens and Matisses tearing cinema tickets and pulling pints (not to mention the proven increase in productivity to the workplace). But crucially, a Living Wage would allow them to continue working flexible jobs, still living a fairly subsistence existence but having the opportunity to experiment, develop and produce potential future masterpieces with which to enrich our lives and stimulate our senses (and the economy).

Come on people. Come on Picturehouse. Pay the Living Wage. You profit from our creatives every time the projector rolls, but the reel is starting to unravel. As the Big Lebowski says, “The Dude minds, man, this just won’t stand!” 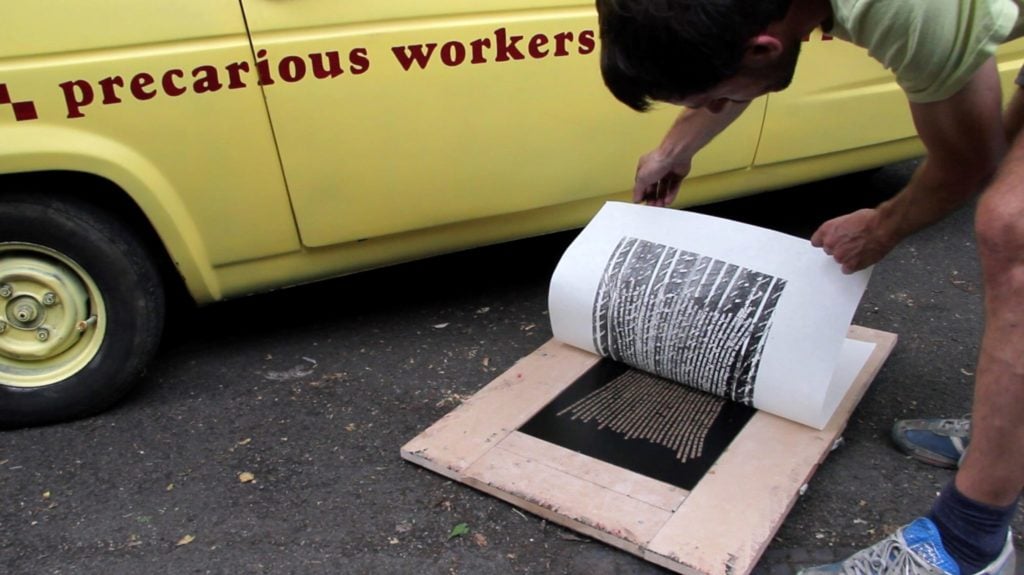