‘The Green Floor’ exhibition celebrates what it says on the tin. In Hyde Park Book Club, on a white wall especially installed for the occasion, 20 photos of fruit, pots, utensils, and other objects put in various arrangements on a starkly green floor are set on a 3 x 7 grid. Although not explicitly presented as such, the real item of interest is the installation directly below the prints. It is a green floor, modelled to be an exact likeness of the original floor that features in the photos which inspired the project.

The green stage in the venue’s cosy space leaves a powerful impression. It attracts, as if the green floor tells visitors to ‘come step on me’. This makes the installation interactive – as opposed to being something they cannot touch, guests are invited to walk on it, to bring their own objects and take photos of still life, or anything else, including themselves, on the green floor.

On the opening night of the exhibition many people interacted with the green floor in the manner suggested. And even though more visitors were perplexed by the exhibition pieces than were in love with them, most seemed to enjoy just walking around on the green stage. This is kind of the point. Some were laughing aloud at the jokingly pretentious titles (‘Contextualised green. A fragment’; ‘Untitled XXXVI’) and ironic exhibition blurb written in the extremely obfuscated language that could be produced by a student desperately trying to sound like they know what they are talking about in their term paper (“decolonises the increased fragmentation of our postmodern, zoomer landscape”). The random conglomeration of abstract words reveals an irony with which the exhibition sees itself.

The trio behind ‘The Green Floor’ – Emily Herring, Hannah Robson, and Oliver Engley – are housemates who in April 2019 repainted their kitchen floor the bold green colour we see in the exhibition. The touch-up not only made their kitchen look appealing, but it also resulted in them spending more and more time there. The floor with its greenness soon began to obsess them, inspiring them to put all manner of objects of different colour and sizes on it just to see how they would look. 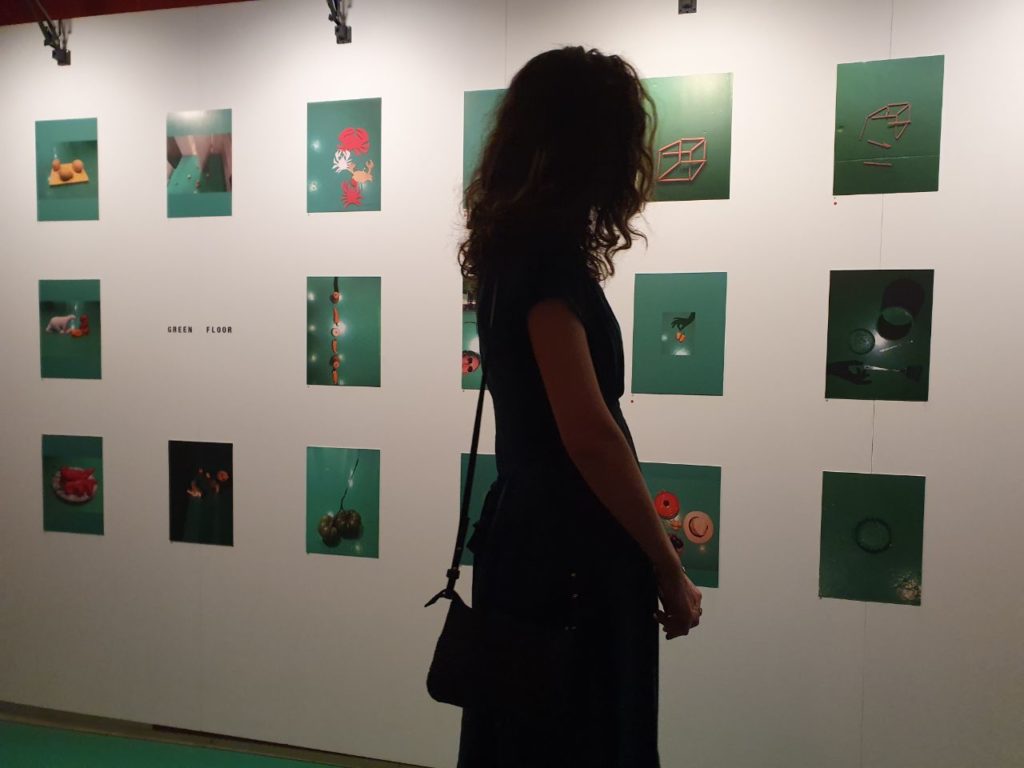 This playful, childlike fascination is what is at the heart of ‘The Green Floor’ project rather than an explicit interest in the good old still life art-form, which is ultimately the genre their photos would fall within. Spending a few minutes in their kitchen with the artist trio is enough to understand their fascination, which it’s dangerously contagious. In their experiments, they found that objects of similarly bright colours and dramatic outlines look best on the floor. But they so played with everything else, including themselves. In the process they found out that one of the reasons the colour is so fascinating is that it is ‘the greenest of greens’. As they explained to me, it just seemed that any other green put on the floor was either too blue or too yellow.

But it is not just about the colour. The subject matter is original. A colour put on an object so mundane we often forget to think of it as an object at all – a floor – has the power to evoke moods and reflect the familiar in an unfamiliar light.

The Green Floor trio started an Instagram account last summer (@greenfloor4ever). Social media and the insistence of a few friends resulted in setting up the exhibition we can see today. The artists put some honest effort into it – it was not to be a quick thing of a few prints hanging up a wall, and this effort and attention to detail makes it hard to think of the project as predominantly ironic. But as Hannah says: “People keep asking if it is ironic or not. But I don’t understand – why does it have to be either?”

One thing seems to be certain though – the exhibition is not a mockery of the art-world. Its intention is not to trick the audience but to share a simple unfiltered joy a bright and unusual colour put in an unusual place can bring. While the blurb and titles – which are an afterthought to the rest of the project – do mock the overly obscure language of art writing, the aim of the blurb seems to be to simplify things than make them more complex. Surely, a blub that jokingly negates itself and gives the visitor no guidance at all in interpreting the work is better than an honest one! In the end, what’s left is for the visitor to take away the stark shade of green put on the floor, and the pure joy of interacting with it. Looked at from this perspective, it would seem that the photos are not there so much to be considered in their own right, but to share the joy the green floor has already brought to others.

‘The Green Floor; is free to visit (and step on, dance on, or take pictures with) in the Hyde Park Book Club. The installation will remain there for the foreseeable future.

Tagged with: colour, exhibition, floor, green, green floor, humour, Hyde Park Book Club, objects, paint, photography, playful, selfie, still life
Pl ayful, childlike fascination is what is at the heart of ‘The Green Floor’ project rather than an explicit interest in the good old still life art-form
“People keep asking if it is ironic or not. But I don’t understand - why does it have to be either?”
In the end, what’s left is for the visitor to take away the stark shade of green put on the floor, and the pure joy of interacting with it.