“Art naturally responds to everything” – interview with artist Josie Jenkins 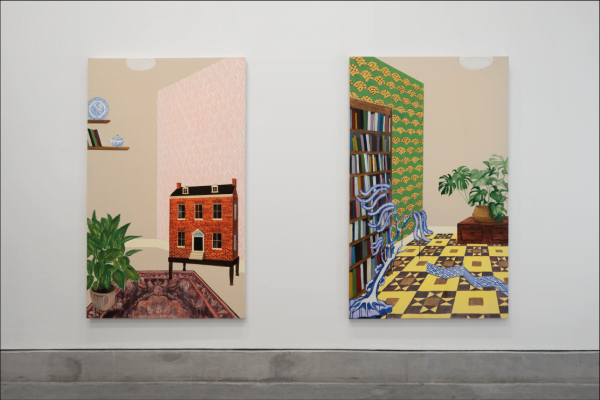 One of the prominent charms of Josie Jenkins’ paintings is their accessibility. Rich with motif and symbolism drawing from the everyday, they are familiar and approachable. This isn’t to say they are easy or complicit, in fact, Josie admits people often find her work dystopian. The paintings certainly hold hands with the uncanny, and with their familiarity comes a quiet sense of unease, almost like a dream.

Josie’s Assembled Worlds is at Liverpool’s Bluecoat until January 10th. It marks a rare self-indulgence for the artist, whose practice involves as much the facilitation of the artistic projects of others as it does her own. One of the many projects Josie co-runs, Refractive Pool, is soon to release a book documenting the art of 40 of Liverpool City Region’s painters.

What defines Josie’s artistic project is this concern for other artists, for alienated audiences, in other words, for bringing art away from the gallery. Perhaps this consideration is what gives her art that uncanny, familiar quality. Nonetheless, she is of an uncommon breed in a vocation where individualism is often entangled with success and the mystification of an artwork with its excellence.

The paintings in Assembled Worlds date as far back as 2012 and as recent as this year. How would you say your practice has developed in between?

With the painting from 2012, ‘Geograph Collage with Paper Clips’, I hadn’t really analysed why I was doing the things I was doing. I was just doing. When people said to me “What’s this painting about?” I’d think, oh God I’ll just have to make something up and I’d just take a stab at it. Since then I’ve had a better understanding of why I put things into paintings, and why it is that I want to paint certain things or select certain images or symbols.

There’s an element of play in the inclusion of children’s toys in some of the paintings. Do you experiment a lot with your art? Is there a playfulness?

A lot of painters will embark on a painting and battle with it until either they’re happy with it or throw it away. When they set out to paint, they only have a vague idea of what they’re going to produce. I used to work in that way, sometimes I might still do, but I find it very frustrating. Most of the time it doesn’t work out and I can’t deal with spending hours on a painting that ends up in the bin. A lot of people can let go of that, but I find it really tough. I like to feel that my time is productive, which, honestly, I don’t think is a good trait.

This show marks the beginning of a new exhibition programme at the Bluecoat that aims to showcase more artists with a faster turnaround. Do you think it’s important for art to be responsive?


I think art naturally responds to everything. I suppose there are differences between art responding and institutions responding. I feel that artists will just do, a lot of the time, they just will respond. Whereas institutions have this role in society, a gallery like the Bluecoat has a role, and there are potential limitations within that role. But I personally think it’s important for art institutions to respond to what’s happening in all walks of society, rather than just platforming what’s popular, or things that conform to the current way of thinking. I think galleries have a responsibility to challenge ideas and to try and understand that what’s popular in the art world isn’t necessarily anything like what’s going on in the heads of the people out there.

When talking about your 2016 project Hidden Gems, a limited run pamphlet on Liverpool’s independent art scene, you said that smaller, independent galleries in Liverpool are overshadowed by higher profile institutions, like Tate Liverpool. Do you think that the pandemic has affected that in any way?

God, so much has changed since we did that paper. The Bluecoat putting on this run of Northern-based artists is a really good example of that. At that time, I just thought this would never happen. The problem that I had was that no one knew about any of the smaller, artist-led places that existed. If you spoke to anyone about art institutions in Liverpool they’d just know about the Tate, the Walker, the Bluecoat, I didn’t feel local artists were being supported by those bigger institutions.

I also felt that if you were one of these less well-known artists, you could do anything you wanted to do. Sometimes you would come out with some really great work or equally you could do something pretty bad, and that freedom is what is needed to create the really good stuff. You have to be able to fail tremendously and take that risk to make the best stuff. But I felt that was something too high risk for the larger institutions to gamble on. I was just frustrated that those larger institutions got to decide who’s spoken about and who isn’t. I felt that they weren’t taking enough risks.

I don’t know how that is now. With coronavirus, everything is tough on everyone. It’s been really, really tough for grassroots and independent artists. They might not have the resources to put on a COVID-safe exhibition: there aren’t as many structures in place for them to use. If artists aren’t putting on things as much now, I don’t know if it’s anyone’s fault. Artists like to do things off the cuff mostly. Coronavirus isn’t good for that; you have to think very carefully about how these things will be safe for people. Independents usually don’t have all the red tape stuff that big galleries do. I suppose for me that’s the way the virus might’ve affected those smaller organisations, rather than the bigger ones. But to be honest, I think it’s been tough for everyone.


You have just finished crowdfunding to produce a book for Refractive Pool, your project with Brendan Lyons documenting contemporary painting in Liverpool.  Do you think it’s important to have documentations of specific scenes and moments in time?

That’s one of the reasons that we really wanted to do this, because there’s a lot of documentation of the artists around in the 60’s, and everyone has a very strong sense of that time. But since then all sorts has happened and there isn’t anywhere to revisit that. I think it’s just happened and hasn’t been recorded in the same way. The internet can stop something like a physical book being produced, you know, because there’s so much you can just put there.

So, I do think it’s important to capture moments in time. I think that a lot of the time it doesn’t happen just because no one does it. Brendan and I always say to each other that we’re doing this because no one else is. We’d be more than happy if someone else had done it; but also part of it was that we felt we could do a good job of it, between us.

Are there any books that come to mind that you think could’ve inspired the book, at least partially, or have provided some inspiration for how you see the book coming out?

With the book there was a lot that we knew we didn’t want to do. We didn’t want to create something just like an exhibition catalogue, and it’s taken time to come decide what we want to create. We don’t want it to be too formal or coldly academic. We wanted it to be something that any person could pick up and enjoy for all sorts of different reasons, and besides there’s already plenty of places you can read critical art writing. Not that there’s anything wrong with that, but that wasn’t what we decided we want to do.

With the book coming out early this year, 2021 is looking exciting for you. Would you say that Assembled Worlds represents a conclusion to a specific period of your art?

I came to a point a couple of years ago when my sister was ill with breast cancer. The odds were in her favour and everything, but it completely changed what I thought was important. Before that I was so fixated on my career, on becoming a successful artist, and that’s really all I thought about. Then, with what was happening with my sister I just realised it was hilariously funny that’s what I found important. I decided that other things were definitely more important.

I’ve never been asked to exhibit in a public art gallery in a solo show before, and everything else that I’ve done has been put on in collaboration or I’ve had to apply for. No one’s come up to me and just asked me to do something like this. So, it is a milestone, definitely. When you get to see your work on the wall in a major gallery, it’s always a time of reflection where you can start afresh with your artistic ideas.

Due to the national lockdown the Bluecoat gallery is currently closed, please check their website and social media for further details.

Tagged with: art, artist, Bluecoat, book, Brendan Lyons, community, contemporary art, covid-19, dystopian, exhibition, grassroots, institution, interview, Josie Jenkins, liverpool, local, northern, painter, playfulness, public, publication, refractive pool, uncanny
"Artists like to do things off the cuff mostly. Coronavirus isn’t good for that"
I like to feel that my time is productive, which, honestly, I don’t think is a good trait.
The internet can stop something like a physical book being produced, you know, because there’s so much you can just put there.